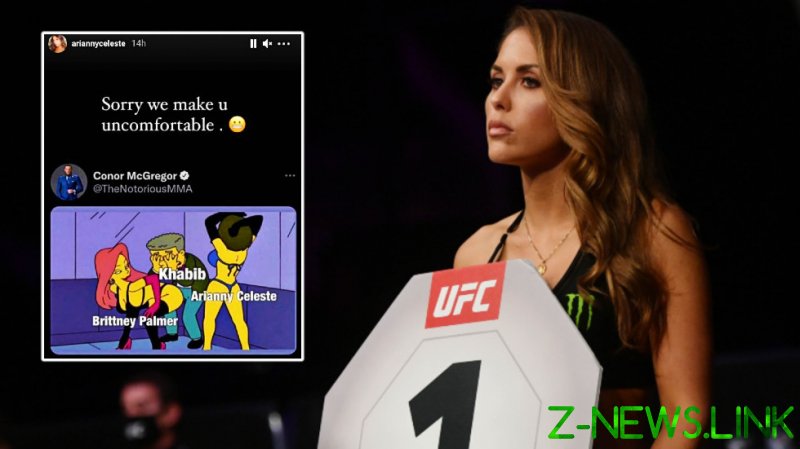 Self-described artist, ring girl, host and designer Brittney Palmer was mocked up waving her behind in Nurmagomedov’s face in a version of a Simpsons cartoon produced by the Russian’s former arch-rival on Tuesday.

Retired champion Nurmagomedov was cast as Waylon Smithers, one of The Simpsons’ particularly naive characters, as he covered his eyes behind Palmer’s half-naked body in a reflection of his comments that card girls are “absolutely unnecessary”.

34-year-old Palmer, who has hosted UFC after-parties with McGregor and created a painting of the Irishman, retweeted his typically provocative post and added: “Sorry not sorry”.

A two-time Ring Card Girl of the Year at the World MMA Awards, Palmer would have watched the ensuing debate with interest after Nurmagomedov – arguably the most influential name in the sport – said women were “created equal” to men but admitted he had felt uneasy at seeing ring girls at events.

Russian MMA legend Alexander Emelianenko does not agree. “I am for them,” the veteran powerhouse was quoted as saying by Metaratings.

“This is an addition to and decoration of tournaments. The audience is also pleased to be able to look at the beautiful girls who announce what the next round will be.”

“But ring girls don’t go out in a cage or fight. They’re there for the show. I like it because it has historically happened in boxing, and now, of course, in MMA,” the British pundit opined on his podcast.

“Ring girls are an addition for the audience – they add pomp and splendor to all this, make the event a little more fun.

“As for Khabib, may the Lord bless him. He is a man of honor and does not play games. Let’s just say it’s not his style.

“I understand this and I am a huge fan of Khabib. I won’t talk bad about him but come on, man – let the girls work.

“They make a lot of money through sponsorships, brand contracts and so on. They are famous in their own way.”