Home / WORLD / Sorry to be such a doom-mongering Jeremiah, but I fear we face THREE YEARS of wave after wave of Covid outbreaks and lockdowns

Sorry to be such a doom-mongering Jeremiah, but I fear we face THREE YEARS of wave after wave of Covid outbreaks and lockdowns 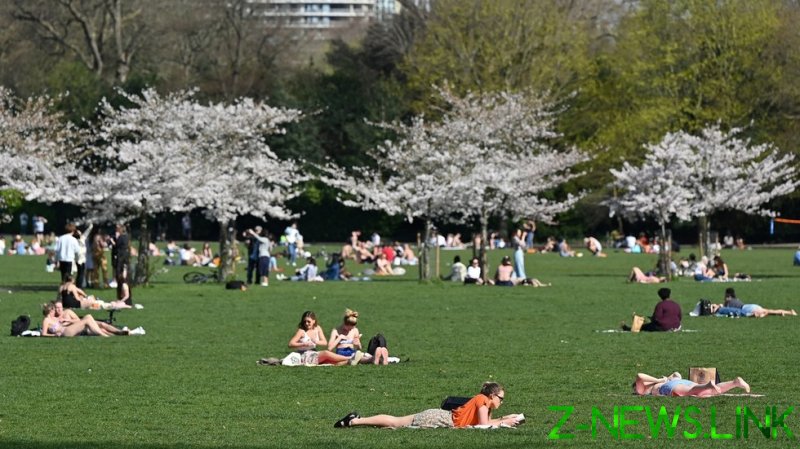 Actor, freedom fighter and London Mayoral candidate Laurence Fox may not be everyone’s cup of community cohesion; but I’ll give him one thing: he’s got chutzpah. Launching his election bandwagon this week while posing in front of an open-top double-decker bus, the self-styled “anti-woke campaigner” told the capital’s nine million denizens (and anyone else who’d listen): “I am going to unlock London and I am going to return her to you,” before promising he’ll “give you all the help you need to get back to work, to have fun, to be with your loved ones, and hug your families.”

Granted, it’s easy to mock the flatulent Mr Fox, his flaccid free speech ‘manic-festo’ or philosophical skirmishes with ‘the left,’ fought as they are on the fantasy frontlines of Britain’s phony ‘culture war.’ But one can’t help but applaud his sentiments. Why, after a couple of stiff ones, I could readily root for Larry’s David vs incumbent Sadiq Khan’s Goliath.

I’ve seen the latter, on occasion, cruising around my local common with his security goons, as he also lives in the neighbourhood. I don’t like the look of him, or his meddling in London’s transport system, so I wouldn’t mind giving him a bloody nose, at the polls of course, come May 6. Former Labour MP Khan’s the bookie’s favourite and a shoo-in to win. But we Brits, after all, love nothing more than bringing someone down a peg – and backing an underdog. And they don’t come any more ‘under’ or ‘dog’ than Fox, seeing as he’s got zero percent chance of beating Khan to the £152K-a-year trough.

However, tribal loyalties dictate that any drunken enthusiasm or cockney nostalgia for “the good old days” is soon curbed by political reality; and that reality is Fox, and a host of snake oil activists, campaigners, MPs, celebrities and ‘thought leaders,’ are using self-evident slogans, empty rhetoric and Covid confidence trickery to dupe Londoners into believing SARS-COV-2 is an ‘enemy’ that can be defeated any time soon.

For starters, what Londoner doesn’t want to “unlock” his or her life and return to hugging and kissing, having serious fun or making serious money – just like we used to? “Boris Johnson tells us that we must ‘build back better’,” Fox laments. “I disagree. We should build back freer.” But build back what, and how, when and in what form? London cannot and will not be the same city it was pre-pandemic, but Fox, Khan or the Tory stalking horse and no-hope mayoral candidate, Shaun Bailey, have little in the way of a vision, let alone a plan that can get the capital through the proceeding bumpy years.

In 2020, according to the Greater London Authority, tourism spending in the capital fell by £10.9 billion compared with 2019, with more than 26,000 jobs at risk in arts and culture alone and the night-time economy battling for survival. Central London contributed £38.7 billion annually to the Treasury before the pandemic hit. I’d hazard a guess that the only growth industries right now in London are debt collectors and undertakers. But economics and the virus are inseparable when it comes to charting London, and by extension, Britain’s course in the foreseeable future.

As one senior London NHS clinician told me last autumn, “It’s grim, and getting worse. I expect the pandemic to play out over three years with waves every spring and autumn.” More recently, an old doctor friend told me, by way of a second opinion: “I can’t comment on the notion of a three-year cycle. But suffice it to say it’s early days for throwing our arms around grandma. Autumn and winter will be the litmus test.”

My first source was speaking at a time before the UK vaccine rollout, which has seen more than 30 million people immunised as part of Britain’s largest ever inoculation programme. Back in October, when I spoke to him, nearly 45,000 registered deaths in the UK were attributed to Covid-19. Today, that figure stands at 127,000.

A new survey by Ipsos MORI of more than 8,300 people aged over 16 in the UK found 78% support ‘vaccine passports’ for travelling abroad or visiting a relative living in a care home. The same poll found that 62% of respondents were in favour of the controversial idea that they’d be happy to use one to get into a pub or restaurant.

Throughout the pandemic, Brits have pined over the loss of access to the pub – and the crumbling away of this cornerstone of British society. To uninitiated foreigners, and more blissfully ignorant Britons, the endless conversations, debates, discussions, memes, comedic skits and policy turns and u-turns concerning the ‘reopening of pubs’ seems trite or banal when set against the loss of liberty, livelihoods and lives wrought by Covid-19. But aside from the pub industry’s £8.2 billion in lost beer sales, and the permanent closure of 21 pubs per day since the start of the pandemic, the death of the pub is a symbolic hit of national significance.

Just as Britain’s petty wrangling with the EU over penny-pinching fishing rights was really a metaphor for control of the UK’s maritime sovereignty, with the humble bag of fish and chips used as psyops to get post-Brexit Brits onside, the pub is promoted by anti-vax, freedom fighting, libertarian keyboard warriors and paranoid, germophobic, lockdown-loving liberals alike as a key ideological battleground.

Waxing lyrical, and comparing the vaccine passport to the Chinese state’s social credit system, ‘American liberal feminist author, journalist, and a conspiracy theorist’ Dr Naomi Wolf posted a video the other day saying, “It’s being promoted in Britain that you have to scan your vaccine passport in order to go to a pub and have a pint.”

Having spent way too much time in way too many pubs, bars and clubs myself, I get the metaphorical and symbolic importance of the pub, of London’s entertainment industry and its night-time economy. It is one of the most liberating cities in the world to go out and have fun, meet people, fall in love and carve a destiny for yourself. Lockdown has put paid to that. But in a week where long-awaited restrictions are finally lifting, the Foxes, the Wolfs, reactionary reptiles and left-leaning lounge lizards are by turns creating false narratives of hope and despair. As screenwriting legend William Goldman said of the Hollywood ‘formula’ for success, “Nobody knows anything.” When it comes to Covid-19, bar the experts, everybody knows nothing. And herein lies the danger.

Less than 24-hours into the magic Monday this week and the introduction of the UK’s ‘Step One’ in its roadmap out of the latest Covid-19 lockdown, greater freedoms brought with them, as we say in the East End, people ‘taking the piss.’ Two parks in Nottingham had to be closed following “appalling scenes” as huge crowds left landfill-sized piles of litter behind on the hottest March day in more than half a century. Large crowds also gathered in parks and on commons and beaches throughout the country on Tuesday and Wednesday, prompting police chiefs to threaten they would disperse crowds not obeying ‘rule of six’ social distancing. The UK government’s SAGE advisory board has already warned that large crowds gathering “could blow it” by not adhering to restrictions.

Health secretary Matt Hancock has pleaded with the British public to “don’t overdo it,” which for anyone who knows anything about the British public is about as useful as trying to pick a lock with a ripe banana. The British are, essentially, a passive-aggressive nation. They will go along with whatever rule, regulation, privation or restriction is foisted upon them then, on the sly, seek to subvert authority through obfuscation, denial, sabotage, loopholes and general shithousery.

If the warm weather continues and Brits keep hitting the bottle in the coming weeks, Boris Johnson’s plan to end all restrictions on June 21 could fall apart. The consequences for him, and public order, could be catastrophic. Given the introduction of the government’s policing bill, an increase in public demos and growing stand-offs between an unruly public and beleaguered police forces this summer could be make-or-break time for pandemic and politician alike.

Meanwhile, across the pond, the director of the US Centers for Disease Control and Prevention (CDC), Dr Rochelle Walensky, warned that America faces “impending doom” as coronavirus cases and hospital admissions rise across the country. Combined with the calamitous vaccine situation in Europe, with new lockdowns across the continent due to emerging covid variants, the UK may find that its draconian travel ban, which has effectively turned Britain into an open prison populated by 65 million inmates, could run and run. Not that the Treasury will complain. Forcing Brits to spend what little cash they have left at home, in the pubs and on their second obsession, shopping, rather than abroad, will do much to support sterling.

SARS-CoV-2 is a thing. The commentariat can babble all it likes about who or what’s behind it, how it got here, how many have it or don’t have it, whatever. The smart money is on it being here for a while, with wave after wave of outbreaks, spikes, dips, lockdowns, restrictions, easing and radical behaviour change becoming an ever-evolving ‘new normal.’ The notion of vaccines or herd immunity having any effect will, by their very nature, take time to assess. I just hope my countryfolk have the patience to keep calm and carry on.