Home / WORLD / ‘Sorry, that is not OK’: Fans enraged as TV broadcasters refuse to cut away from Christian Eriksen as he received CPR on pitch

‘Sorry, that is not OK’: Fans enraged as TV broadcasters refuse to cut away from Christian Eriksen as he received CPR on pitch 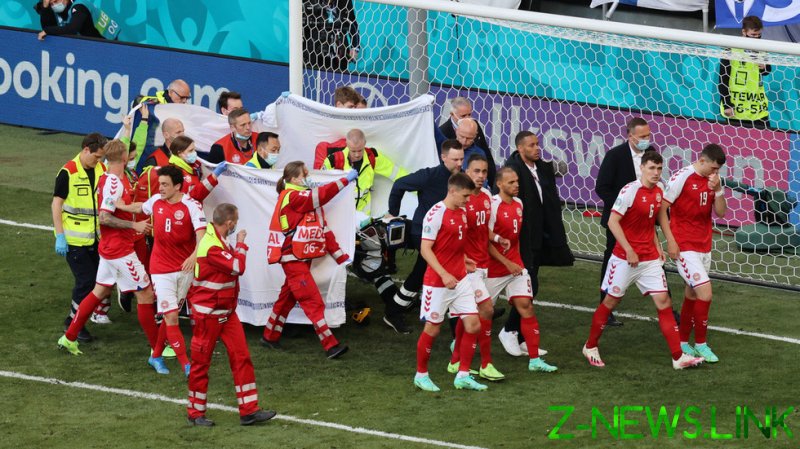 Eriksen prompted immediate concern from the global football fraternity when he collapsed just before half-time during Denmark’s Euro 2020 Group B fixture with Finland in Copenhagen.

The Inter Milan star’s collapse was captured on the television broadcast and immediately showed several of Eriksen’s Danish teammates rushing to help their colleague.

However, some fans have said that the TV cameras lingered too long on the prone star – especially after the Denmark squad formed a protective barrier to obstruct the view from the watchful media.

Despite this, cameras appeared to capture Eriksen being administered CPR on the pitch.

This has prompted a wave of condemnation online, with many football fans hitting out at various television networks for broadcasting such a potentially tragic incident.

“That broadcast should’ve stopped immediately. They don’t show bad tackles or streakers… but they just broadcast that moment and his wife’s reaction to the world,” wrote one football fan in response to the shocking footage.

“Denmark’s players had to form a protective ring around their teammate. A distraught wife was broadcast to the world. TV broadcasters and cameramen are capable of blocking footage of pitch invaders, but not this? Sorry, that is not ok,” said another, while a third also hit out at the BBC for beaming the pictures across the globe.

“We certainly discovered today that BBC Sport have absolutely no respect,” they said.

The wave of disapproval prompted a response from British broadcaster and former England international Gary Lineker, who is the primary host of the BBC’s Euro 2020 schedule.

“We will be back on air at 7.25 on BBC One,” tweeted Lineker. “I understand some of you would have been upset with some of the images shown (we were too). Obviously these were the host pictures and out of our control. They should have stayed on a wide of the stadium. Apologies.“

Lineker’s explanation for the offending images was that the pictures shown aren’t actually controlled by the BBC, but rather at the discretion at the local director inside the stadium in Copenhagen.

Some, though, thought Lineker’s explanation was a little too watery.

“Nonsense, you could have cut to studio,” came the response from one.

“Every country gets the same match footage, but each broadcaster has the power to stop showing that footage. So don’t talk that boll*cks,” said another.

“Neither Denmark nor Sweden showed those images or that feed. Instead they cut to a photo of the stadium almost immediately after medical help arrived. Just FYI,” added a third.

Thankfully, initial reports soon after the incident have suggested that Eriksen’s condition is now stable and that he is conscious and speaking to doctors in hospital.

The game against Finland has since been re-started after sets of players from both teams were assured that Eriksen’s medical status is satisfactory, and he had contacted his teammates from his hospital bed.