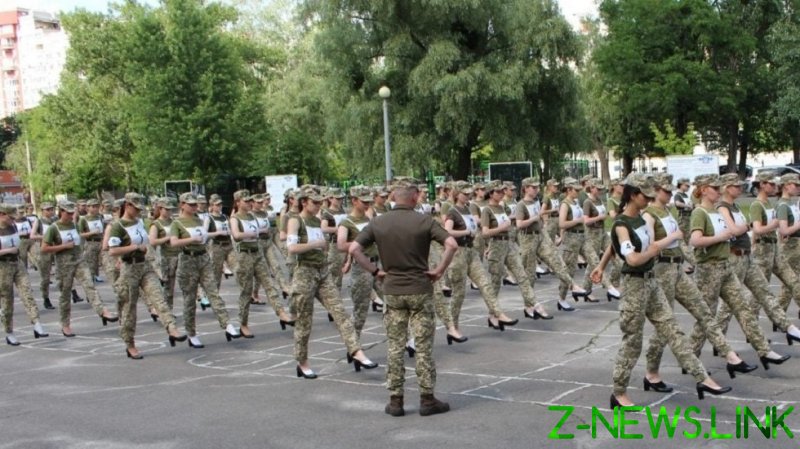 The Eastern European nation is currently gearing up to celebrate the 30th anniversary of its independence from the Soviet Union next month, and the armed forces have already been dipping their toes into preparations. On Thursday, the defense ministry in Kiev published photos of female cadets from a university in the capital drilling for an Independence Day parade. However, along with their camouflage gear, the troops had been instructed to wear conspicuous black high heels.

The images drew attention from the public, with some people deciding that the outfits were demeaning for women warriors. When Defense Minister Andriy Taran came to parliament the next day, he was met with condemnations from female MPs over the photos.

“How could one disgrace a simple idea of inspiration?” exclaimed Elena Kondratyuk, the deputy speaker of the national parliament, the Verkhovna Rada, who led the charge. She answered her own question: “By making female soldiers parade on heels for the 30th anniversary of our independence.”

The minister was also presented with several pairs of stilettos in a gesture of protest. MP Iryna Gerashchenko remarked that Taran and President Volodymyr Zelensky should wear them to the parade in Kiev when the time comes.

While many of the minister’s critics were opposition MPs, like Kondratyuk and Gerashchenko, some representatives from Zelensky’s own party also joined the chorus. One of them, Aleksey Zhmerenetsky, minced no words in wondering rhetorically why women soldiers get “dressed like carnival dolls to entertain the crowd.”

The current parade uniform, which includes heeled shoes for women, was ordered by the defense ministry in 2017, under Zelensky’s predecessor Petro Poroshenko. Defenders of the incumbent president were quick to point out this fact, accusing the outspoken MPs of political posturing.

The ministry offered the same explanation, adding that female soldiers will look “beautiful and strong” wearing the uniforms on Independence Day. The shoes are worn with skirts rather than khaki pants, according to military regulations, and that is how the cadets will be dressed for the occasion.

Amid the scandal, one of the MPs said the minister promised her that the shoes the cadets will wear for the actual parade would be “different” from those shown in the ill-fated photos, presumably with shorter heels.

Women serving in the military, police, and similar institutions in other countries routinely parade on reasonably high heels. Examples can be found in Ukraine’s neighbors Russia and Belarus, China, or NATO member Italy, for Ukrainians preoccupied with standards of the US-led alliance. The embattled defense ministry used the same argument, defending its clothing choices.