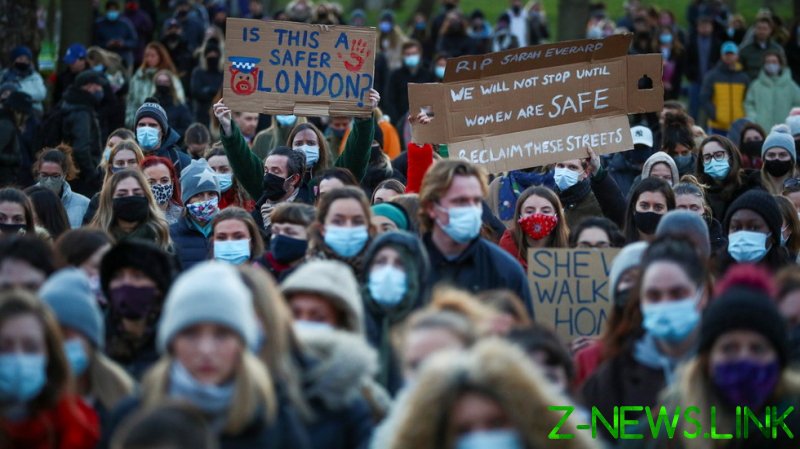 A serving officer of the Metropolitan Police, Wayne Couzens, is charged with the kidnapping and murder of a 33-year-old woman. What’s the state’s response?

Well, according to today’s newspaper reports, it’s to have plain-clothes police patrolling bars and nightclubs to ‘protect’ women? What could possibly go wrong?

Prime Minister Boris Johnson has said that the Sarah Everard case had “unleashed a wave of feeling about women not feeling safe.” But again, it seems those with hidden agendas have exploited this feeling.

If you’ve got a sense of deja vu about this, it’s not surprising. We’ve been here before. Lots of times. There is a ‘terrible event’. It might be a murder. Or a mass killing. Or an alleged chemical weapons attack. Or threatened massacre. Or predictions of hundreds of deaths from a virus. The cry, amplified by influential social media accounts, Inside the Tent journalists, breakfast TV presenters and the 24-7 news cycle, goes up: ‘Something Must Be Done!’

Inaction is deemed to be a crime. Politicians start falling over themselves to be seen to act. Critical thinking goes out of the window. Emotional manipulation and gaslighting takes over from reason. ‘Iraq has weapons of mass destruction which can be assembled and launched within 45 minutes,’ so there’s no time to prevaricate!

It doesn’t matter if the full facts behind the ‘terrible event’ are still not known. A former Russian intelligence officer and his daughter are poisoned in Salisbury? Kick out Russian diplomats and sanction Moscow! Gaddafi makes threat to ‘rebels’ in Benghazi? Bomb Libya! Reports of a chemical weapons attack in Douma? Bomb Syria! Neil Ferguson’s modelling predicts lots of deaths from Covid? Go into lockdown! Someone’s done some vile racist postings on social media? Introduce even tougher hate-speech laws (make them apply in private homes), and impose even stricter online censorship!

Once the ‘Something Must Be Done!’ cry has been raised, rational voices are drowned out and even the barmiest and most wildly disproportionate responses are up for serious consideration.

Take the suggestion of Green Party peer Baroness Jones for a 6pm curfew for men to be imposed in response to Sarah Everard’s murder.

“In the week that Sarah Everard was abducted and, we suppose, killed… I argue that at the next opportunity for any bill that is appropriate, I might put in an amendment to create a curfew for men on the streets after 6pm. I feel this would make women a lot safer, and discrimination of all kinds would be lessened,” she said.

Yes, that’s right: the Baroness feels that “discrimination would be lessened” by banning one half of the population from the streets after 6pm. Her idea – which treats all men as potential murderers and abductors – should have been laughed out of court, but incredibly #CurfewforMen began trending.

It was left for sociologist Steve Hall to provide some perspective on Facebook. He pointed out that although 93% of murders are committed by men, this is 93% of a tiny number. In 2019, Hall noted, out of 32,900,000 males in the UK, 624 committed murder. Amounting to 0.00189% of the total. And because of the actions of 0.00189%, the 99.9981% are to be barred from ever going out after 6pm? How utterly absurd. But don’t rule it out, if the powers-that-be think it serves their interests. After all, locking down the whole country for the best part of a year on account of a virus would have seemed utterly absurd 12 months ago, but it happened.

Of course, lambasting ‘Something Must Be Done’ hysteria doesn’t mean that practical, proportionate, evidence-based measures should not be taken after proper review where necessary. Women’s rights campaigners have called for the police or CPS to seriously investigate and, if necessary, prosecute sex offenders when reported. And we surely ought to have a debate over whether punishments for convicted offenders are too lenient and provide enough of a deterrent.

But there’s a world of difference between taking complaints seriously (which should always happen), and having undercover police officers patrolling bars and nightclubs, which has grave repercussions for civil liberties. How will these plain-clothes cops determine what is ‘harassment’? Will a man trying to chat up a woman he fancies at the bar lead to his arrest? And who will police the police on this to make sure they themselves aren’t doing any harassing?  Furthermore, what guarantees do we have that these undercover officers won’t also be deployed to eavesdrop on people’s private conversations and seek to record ‘hate speech’ incidents (there have been renewed calls since the Everard murder to make misogny a ‘hate crime’), or even apprehend people expressing concerns over vaccines on the grounds they are ‘endangering public safety’?

The story of the last 12 months in Britain is one of extraordinary state/police overreach. Of how a ‘public health crisis’ was used to destroy centuries-old freedoms and usher in an authoritarian ‘new normal’ with a renewed witch-hunting of dissidents.

And just as people are getting really fed up with lockdown and never-ending Covid restrictions, it seems that the tragic death of Sarah Everard will be used to grab even more powers for the state and police on the grounds of ‘protecting women’. Once again, as in the international sphere where regime-change wars made some very rich people even richer, but left entire countries destroyed, ‘Something Must Be Done!’ is likely to end up serving the interests of the powerful, as it always does.