Home / policy / “Some will be literally nothing to eat”: the Russian economy was predicted to collapse by 30% 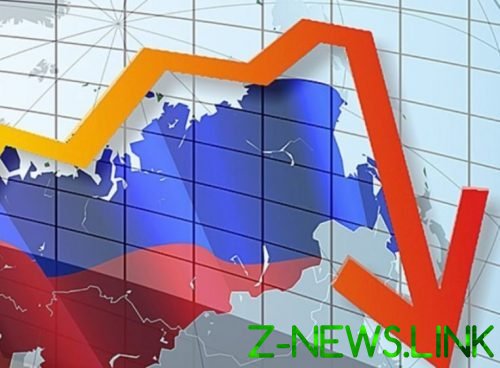 The first symptoms of a severe case of coronavirus has appeared in analyses of the Russian economy. At the end of March, prior to the imposition of quarantine, business activity in the private sector of the Russian Federation fell to a record 11 years.

The composite index PMI, which Markit expects IHS monthly on the basis of data on sales, orders, and business confidence fell from 50,9 to 39.5 points, having at least 2009.

While non-oil industry, an economic crisis spared (PMI declined to 48.2 to 47.5 points), the services experienced a shock compression of domestic and external demand and were forced to reduce capacity and cut staff. The volume of export orders fell to a record from February 2009, the employment rate has slipped to the “bottom” of the recession in 2016, and business expectations for the future tumbled to historic lows, lists Markit in the release.

The lack of suppliers, delays in transportation and the devaluation of the ruble has created a record over a 13-month leap in input prices. Part of this inflation companies had to pass on to customers, which could not affect the sales. The composite index of business activity in sector of services has fallen from 52 to 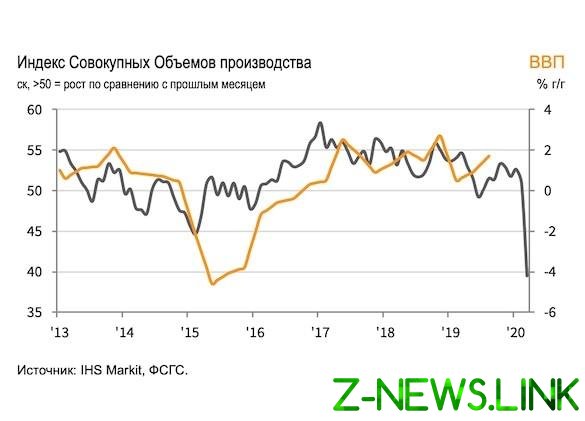 April promises Russia sharp deterioration of the situation with a double-digit fall in GDP. Chief economist of Alfa Bank Natalia Orlova estimates it as 20%, ING and Raiffeisenbank – 30%. The economy will operate at 55% of capacity, says Citi economist for Russia Ivan Chakarov. That is, the losses can reach 45% of GDP.

“There is no doubt that April will be the most disastrous month in the Russian economy in modern history,” – said the Director of analytical Department of “Loco-invest” Cyril Tremasov.

In the second quarter, if we look at the composite PMI, GDP collapse may be about 9-11%, said the chief economist of the Russian direct investment FUND Dmitry Polevoy. At year-end GDP will lose 4,2%, Tchakarov predicts 4.6 trillion rubles in monetary terms.

To recover quarantined in an easy manner the economy will not be able, as “black Swan” coronavirus arrived not alone: the collapse in oil prices to levels of the late 1990s, promises to shock reduction in foreign exchange earnings. At an average price of $ 20 per barrel of Urals in the second quarter of commodity exports bring into the country only 19 billion against $ 64.9 billion a year ago, analysts warn that the Agency’s National credit ratings.

For the first time in the 21st century, Russia may find itself in a situation of deficit in the trade balance – export revenues will not cover expenditures on procurement of goods abroad.

In other circumstances this would lead to a further decline of the ruble. But the course holds that to buy foreign currency for almost no one. Import paralyzed quarantine, the purchasing power of the population decreased sharply; “a certain number of Russian citizens will be very soon, literally nothing to eat,” says President of ACI Russia Sergey Romanchuk: “If before the risk seemed illusory, now increases the probability of any previously seemed fantastic, scenarios”

“Declared holidays with pay to shift the costs for maintaining the social peace of the state on the shoulders of business owners, who sometimes just don’t have the margin to pay wages for several months without income from operating activities”, – he complains.

The tourism industry, hotels and airlines are already in a state of clinical death. Then as gangrene, the coronavirus will devour non-food retailers, restaurants and services. “To a large extent, these sectors represented small and medium business: most of these companies no cushion of liquidity and the high share of fixed costs (rent, salaries), the visible debt load and often low profitability, and most importantly – many of them were forced to almost completely stop the activity,” says the economist of Raiffeisenbank Stanislav Murashov.

According to key sectors, the economy began to fall in March: 0.1% decreased the production of oil, 12.3% collapsed gas production, accelerated decline of cargo transportation. “Extended throughout April quarantine ensures a significant drawdown in April,” say analysts at PSB.

Large-scale production, oil industry, metallurgy, financial sector and other sectors, which together account for 70% of the economy, will continue to work, and as a result the decline of GDP by the end of the year will be small – about 3%, estimates Murashov.

But behind the deceptively modest figure hid large problems on a private level, he says: the closing of small businesses, bankruptcies, layoffs.