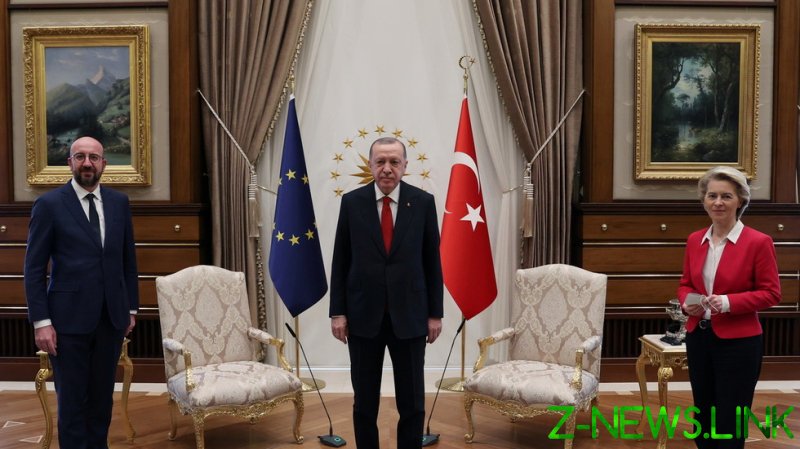 Speaking on Wednesday, Ursula von der Leyen’s spokesperson, Eric Mamer, said his boss should have been treated equally to European Council President Charles Michel during a meeting which saw the European Commission president left sitting alone on a sofa during their meeting with the Turkish leader. The incident has already been dubbed ‘Sofagate’ online, and has undoubtedly led to a stern ticking off for the EU’s protocol team.

“The president of the Commission was clearly surprised and that is something you can see from the video,” von der Leyen’s spokesperson noted, adding that protocol suggests the European Commission chief should be treated in exactly the same way as the European Council president.

But Mamer said von der Leyen decided against making “an issue out of it,” and she didn’t mention the diplomatic gaffe in the post-meeting press conference.

High on the agenda for the meeting was women’s rights, after the Turkish leader recently withdrew from the now ironically named ‘Istanbul Convention’, an international treaty on the prevention of violence against women and domestic abuse.

Footage which emerged on Tuesday after the two EU leaders met with Turkish President Recep Tayyip Erdogan shows von der Leyen looking visibly perplexed by the absence of a third chair at the flag-flanked top table.

The EC president can be heard muttering “Ehm” and gesturing at the two men seating themselves at the head of the room. In a later shot, von der Leyen can be seen seated on a nearby sofa.