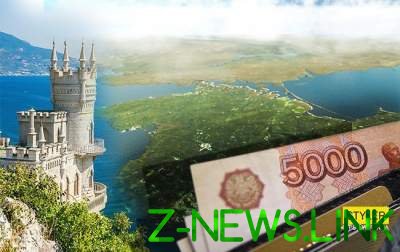 In Crimea, a local resident explained why in Europe “soulless” and “degraded” people. This was written by another resident of the occupied Peninsula Vera Levkovich on his page on the social network Facebook.

“I told the neighbors about how they love Russia. #Krymnash. One yard of Simferopol decided to asphalt the yard. In civilized countries the roads are considered to be binding (because the taxes citizens pay), and this case is not embraced, PR. And then I asked the Deputy (three year matured). The Deputy bureaucrat says: “the Instance You unsubscribe to repair because sending that money there, and take them can’t control with Moscow’s tough.” I have listened to this narration and thought, officials go, like a cat about bowls with sour cream, and can not take. To steal do not give,” wrote a resident of the occupied Crimea.

“The neighbor continued to brag like a feat made: “And I said, I’ve called the offices, they say, we turned to the hot line, and Putin was invited to meet us. And suddenly a miracle! And suddenly the yard is paved, the lights did the bench set, and it so happened that a week indeed, Putin arrived in the Crimea.
The neighbor laughs, but her daughter lives in Europe, here not want to come back, like in the West,” she said.

“Then I asked: “And you think it’s normal to run around for signatures, and then for MPs, with officials at the offices that you to your money order made? Can you imagine this in Europe? “No” says the neighbor. – “Everything for the people, the products quality is better and prices are much lower than ours. But they are also degraded. We have here what? man – he, woman – she, and there is more and It, you know? No spirituality!”. – But they have dentures, make dolphins with the following environment, the volunteer movement around the world developed. “Yes,” says sosedku – “They are good. Like daughter-the products are scattered, so they ran up, helped to collect, although it is then the language almost do not know, the money they have shaft, snickering, because spiritually degraded…” – conveyed the words of women from the occupied Crimea.

“Well, what can I say to a person with higher education and her daughter, who believes that Europe is better? And not afraid after all, and suddenly the child is degraded, the beard will grow?” – posted by krymchanka.