Social networks ridiculed the monument to the Russian “peacekeepers” 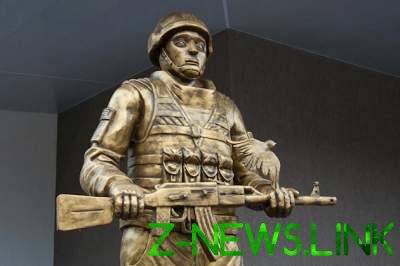 The monument was established in Tiraspol.

In the capital of the self-proclaimed “Republic of Transnistria,” Tiraspol to mark the 25th anniversary of the armed conflict in Moldova, a monument to the Russian “peacekeepers”.

The idea of its installation belongs to the commander of the Russian military in Transnistria, Colonel Dmitri Zelenkova, who opened the monument.

The monument is a figure of a soldier with arms in his hands, his helmet has large letters “MC” (peacekeeping forces). On the pedestal is the emblem of the Russian Federation and the inscription — “dedicated to Peacekeepers”.

“In Transnistria was inaugurated a monument to Russian peacekeepers. Freak like this. But the thing that pop approved”, – said the Russian writer Alexander of Tver.

Internet users are vigorously discussing the monument. They drew attention to the strange figure, “peacekeeper”, unnatural face, and was thinking of another famous ugly monument, a monument to the Russian military with the cat in the occupied Crimea:

“Everything is Transnistria where something happened”.

“Yakut sculptor would be better.”

“He didn’t understand what was won, whether in the pants we*al…”

“This statue greatly puzzled archaeologists of the future.”

“Very nice. Even more beautiful the Astrakhan monument to Putin with wings in the form of a bear trampling eagle clutching a fish.”