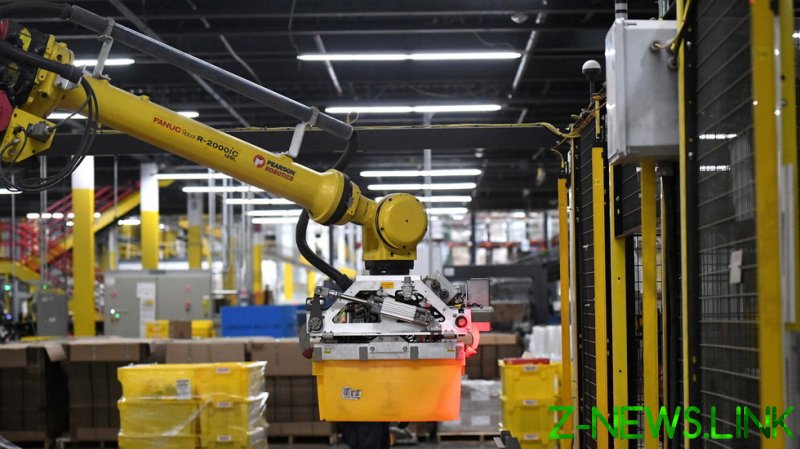 The e-commerce empire founded by Jeff Bezos will offer the American working class a better option than scraping to get by in increasingly expensive cities, investment adviser Conor Sen wrote in a Friday oped for Bloomberg, the financial news outlet whose namesake is billionaire former New York mayor and failed presidential candidate Mike Bloomberg.

“Let’s call them ‘factory towns,’” Sen suggests, apparently in an effort to avoid the baggage that accompanies the concept of “company towns.” Popular in the late 19th century among the new breed of mega-corporations – railroads, steel mills, and the like – many of these dormitory communities held workers as veritable prisoners, paying them in scrip that was only redeemable at the company-run store and retaining groups of thuggish Pinkerton “detectives” to stamp out any attempts to unionize.

Amazon’s “factory towns,” however – Sen writes – are supposedly marked by rising wages, massive job creation and the potential for a “higher likelihood of success” in “solving inequality” than “high-cost metropolitan areas.” He believes that those should be encouraged, at one point even calling these ‘Bezosvilles’ the “future of a large segment of the working class.”

The writer waits until the conclusion to acknowledge the “new issues” that will “need addressing,” little details like “adequate amounts of housing, schools and healthcare facilities.”

Sen is known for his ruling-class-friendly takes, which recently included a call for Americans to embrace the idea of “build-to-rent” communities rather than strive to attain the once-commonplace ideal of homeownership. However, many on social media couldn’t help but notice that it took a financier writing for a news outlet belonging to a fellow billionaire to say anything nice at all about Amazon’s silent conquest of the sprawling spaces between American cities – and the populations that call those spaces home.

“Two out of two billionaires agree…” cracked one tweeter.

Others had to control their gag reflex at the idea that Amazon, which made billions of dollars off the Covid-19 pandemic that saw millions lose their livelihoods and is legendary for tight schedules forcing workers to relieve themselves in plastic bottles, was capable of being a friend to the working class.

Some saw the company inching ever closer to ‘The Warehouse,’ a dystopian yet increasingly realistic send-up of modern American mega-capitalism as practiced by an Amazonesque firm called “Cloud,” while others drew their cultural references from the era of the original “company towns.”

Amazon has trumpeted a recent starting wage increase – from $17 per hour to about $18 per hour – in an effort to attract workers who sat out the pandemic collecting unemployment and now need jobs. The company reportedly plans to hire another 125,000 workers in the US and is deploying unusually generous benefits, like hefty sign-on bonuses and tuition assistance, to convince job-searchers it’s a better bet than Wal-Mart or other megaretailers.

However, Amazon’s reputation for union-busting – which in one memorable case reportedly extended to changing the timing of traffic lights outside a warehouse in order to prevent workers from discussing organization efforts – along with eerie micromanaging of employees’ appearance and sloppy attempts to refute workers’ stories of ‘peeing in bottles’ have made it a decidedly unsympathetic character in the class war.