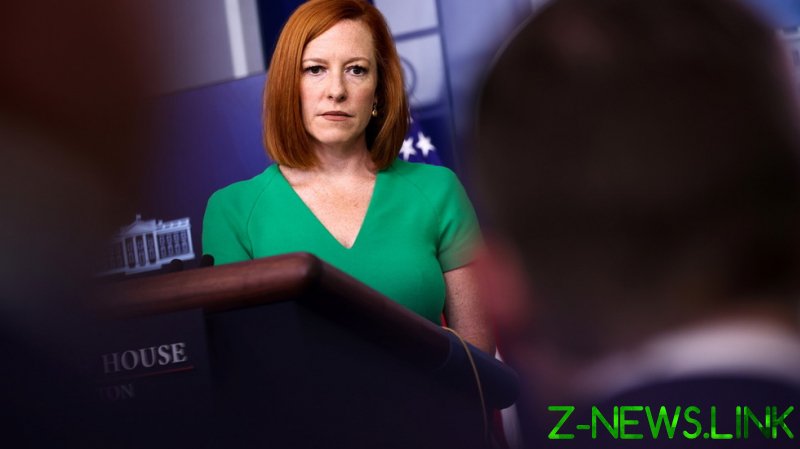 On Thursday, US Surgeon General Vivek Murthy issued an advisory against health “misinformation,” calling it “an imminent and insidious threat to our nation’s health.” He defined it as information that is “false, inaccurate, or misleading according to the best available evidence” and claimed 67% of unvaccinated Americans had heard at least one “myth” about Covid-19 vaccines.

At the same press conference, Psaki admitted the government was “flagging problematic posts for Facebook,” causing a stir among some civil libertarians.

Insisting that it was these ostensibly private companies doing the censorship and not the federal government – thereby trying to dodge the thorny issue of the First Amendment – Psaki then doubled down on Friday, saying that platforms should coordinate their rules and terms of service so that a person “shouldn’t be banned from one platform and not others… for providing misinformation out there.”

Psaki was “issuing decrees on who should and shouldn’t be allowed to use social media, then smugly scoffing at the notion that this should concern anyone on the ground that we’re going to die if we don’t submit to the White House’s orders,” Greenwald added, summarizing her exchange with Fox News’ Peter Doocy.

In a video making rounds on social media, Psaki tells Doocy that everyone, including journalists, ought to be more concerned about “the number of people who are dying around the country” due to misinformation rather than any Big Brother-like behavior by the government. When he argued the opposite, she replied, “That feels unlikely to me.”

“We don’t take anything down… Facebook makes decisions,” she insisted.

Asked politely by Philip Wegmann of RealClearPolitics to explain how often and how long the White House has been flagging “misinformation,” and if she could define it, Psaki responded with generalizations and claims that all this information is “publicly available” on social networks.

Psaki’s remarks amounted to an admission that the government is coordinating with private corporations to ban people from social media, podcast host Jack Murphy pointed out, calling it “literal fascism before our eyes.”

The American Civil Liberties Union (ACLU) was conspicuously silent about this threat to freedom of expression, Greenwald noted, and was instead tweeting about transgender issues.

Meanwhile, a UK-based nonprofit Center for Countering Digital Hate (CCDH) claimed the White House relied on their research in identifying the people producing alleged “misinformation,” and promoted their CEO Imran Ahmed’s TV appearance in which he spoke about online “superspreaders.”

CCDH first drew attention in June 2020, when NBC – one of the big three broadcast TV networks in the US – cited their research in a story trying to pressure Google into demonetizing the blog ZeroHedge and the conservative-leaning online magazine Federalist.