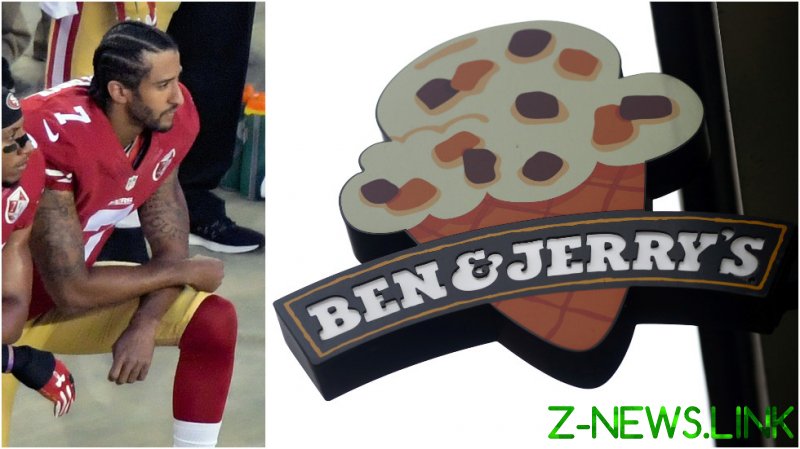 The company’s new “Change the Whirled” frozen dessert, a vegan ice cream substitute made with caramel and cookies, will arrive on store shelves in 2021, Ben & Jerry’s said on Thursday. It’s touted as “the flavor that’s supporting the fight to dismantle systems of oppression and empower black and brown people.”

The packaging for “Change the Whirled” features an illustration of Kaepernick, a Black Power fist and the slogan, “I know my rights.” Kaepernick said the venture will “serve up joy on the journey to justice,” and his share of profits will be given to his Know Your Rights Camp legal defense initiative.

As for Ben & Jerry’s share, that will go to Ben & Jerry’s, which was taken over by multinational consumer goods giant Unilever in 2000. The Vermont ice cream maker has long promoted its activism – on issues ranging from LGBTQ rights to GMO labeling to climate change – wrapping its brand identity in feel-good vibes. The company joined in a boycott last June of Facebook and Instagram advertising to pressure the social media companies to increase censorship of “hate” speech.

But the company itself has been a target of boycott campaigns because of such actions as calling for the release of an alleged cop killer and using flavor names deemed offensive by conservatives. One such flavor was one of the company’s most famous, “Cherry Garcia,” named after Grateful Dead musician Jerry Garcia.

Predictably, the Kaepernick dessert became just the latest “provocation” to punish Ben & Jerry’s, with conservatives calling for a boycott on Twitter. “This is where we’re now at in America,” sports journalist David Hookstead tweeted. “If you refuse to stand for the anthem, are terrible at playing quarterback and lose your job, you get honored with a non-dairy and vegan dessert.”

Other observers mocked Kaepernick and Ben & Jerry’s. “Social justice ice cream – that should fix racism everywhere,” one commenter said sarcastically. Another quipped, “It tastes like unemployment,” while still another called the new dessert “the flavor that pretends to be about doing something positive but is really about making money, and also leaves a bad taste.”

Kaepernick, who hasn’t played in an NFL game in nearly four years, has landed endorsement deals with such companies as Nike and Beats by Dr. Dre. “Kaepernick is so oppressed, he keeps getting multimillion-dollar sponsorship-promotional deals,” one Twitter user said.

But Kaepernick fans praised Ben & Jerry’s for taking another social-justice stand. “Your flavors and your causes are always great,” one commenter tweeted. Another observer said, “Thank you for always being on the right side of history. This is gonna be a top seller.”