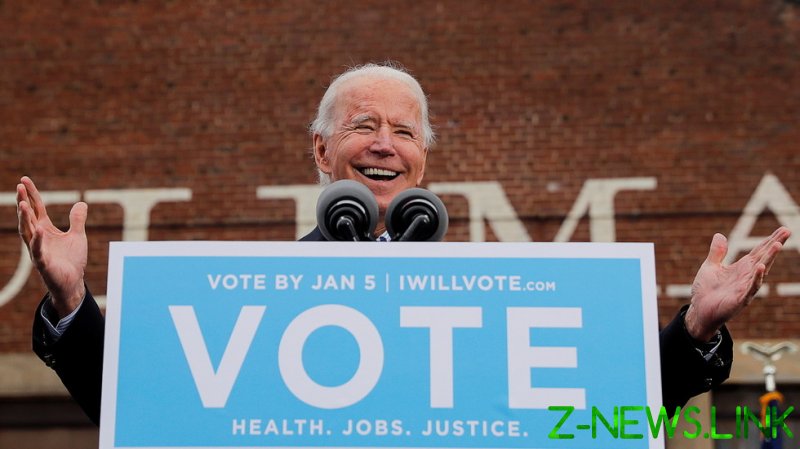 Announcing a series of anti-Russian measures – incorrectly called “sanctions” – last week, President Joe Biden claimed Moscow is engaging in “efforts to undermine the conduct of free and fair democratic elections and democratic institutions in the United States and its allies and partners.”

A White House “fact sheet” also spoke of “Russian government-directed attempts to influence the 2020 US presidential election, and other acts of disinformation and interference” and claimed the US seeks to “disrupt the coordinated efforts of Russian officials, proxies, and intelligence agencies to delegitimize our electoral process.”

Look, here’s the deal – to borrow a phrase from Biden himself – the only one doing the delegitimizing here are Americans themselves. It wasn’t ‘Russia’ that declared the 2020 election was the “most secure… in American history.” It wasn’t the Kremlin that claimed absolutely nothing had gone wrong with any votes anywhere, and anyone so much as wondering about it was evil and ought to be silenced – it was the corporate media and Biden’s Democrats. And it wasn’t VK or Telegram that rushed to do the silencing, but the very American-owned Facebook, Twitter and Google.

It’s not Russia, either, that’s currently engaged in a push to “reimagine” US politics, elections and the very system of government. That would actually be… Biden and his own party, the Democrats.

The 800-page HR1, or “For The People” Act, would fundamentally transform US elections, expanding universal mail-in ballots, mandating automatic voter registration and California-style ballot harvesting, banning voter ID or updating voter rolls, taking from states the authority to draw congressional districts – and if you try challenging it in court, narrowly defines how it can be done to the point where it’s practically impossible.

Just to be sure, the Democrats are now proposing to pack – “expand,” in their parlance – the US Supreme Court. They want to appoint another four justices, and bring the ratio from the current 6:3 in favor of (nominal) ‘conservatives’ to a 7:6 ‘liberal’ majority. Never mind the SCOTUS has been the Nine since 1869, and when FDR – the closest thing to the American Caesar so far – had tried to expand the court in 1937, his own party repudiated him and refused to do so.

Don’t forget the initiative to give statehood to Washington, DC – explicitly prohibited by the US Constitution – that would guarantee Democrats two more seats in the Senate. Or the fact that, asked if he would run in 2024, Biden himself said he isn’t really thinking about it and adding, “I have no idea if there will be a Republican Party. Do you?”

But sure, it’s “Russia” that’s somehow trying to delegitimize the elections and the very system of government in the US… C’mon, man!

Democrats have been at this for a while. The original “Russiagate” – the claim that Trump “colluded” with Russia to “steal” the 2016 election that somehow rightfully belonged to Hillary Clinton and the Democrats – came from Clinton herself, and was then bolstered by the fan-fiction “dossier” paid by her campaign and penned by a British spy. Not a shred of it has been proven true. The two-year Mueller inquiry came up with nothing.

The only “Russians” ever caught actually meddling in US elections turned out to be undercover Democrats, who suffered no consequences for this act. Let’s face it, the “Russian meddling” story has turned out to be as bogus as the “Russian bounties to Taliban in Afghanistan.” It didn’t matter – the objective was to smear Trump as illegitimate and to poison the well of mere possibility he could establish a detente with Russia. That objective was achieved.

As for 2020, perhaps the White House is unaware of the Time magazine feature published in February, about “an extraordinary shadow effort” by a “vast, cross-partisan campaign” to “fortify” the election and ensure the “proper” outcome?

That, of course, is perfectly OK, and is the most heroic story of how Our Democracy arose to replace that evil, racist, white supremacist constitutional republic that never did anything good or true or beautiful and must be completely destroyed. Except it’s not “Russia” or even this American citizen saying that – but Biden himself, and his party, and the most outspoken of his voters, and the corporate media that are in league with them, and all the social platforms too.

Blaming Russia is just how they get away with it.