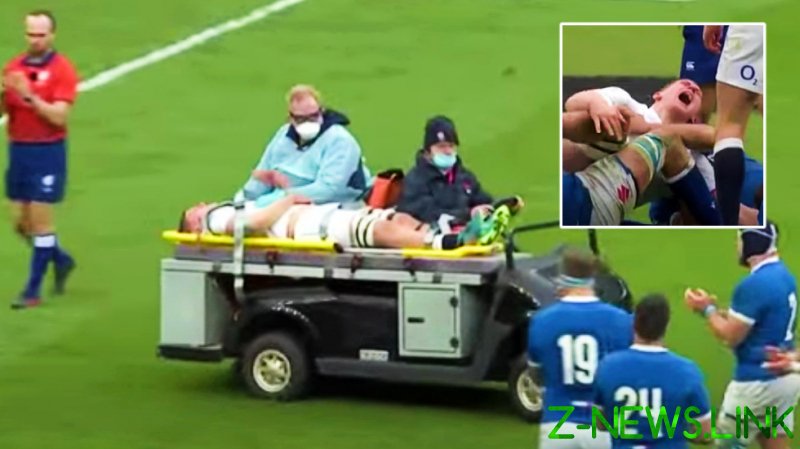 Willis faces an extended period on the sidelines after the encounter with Italian lock Negri in the second half of England’s 41-18 win in London in week two of the annual Six Nations tournament, after his knee was contorted into an eye-watering position as a result of Negri applying the ‘crocodile roll’ technique to remove the three-times capped Willis from a ruck.

The horrific incident, which arrived just minutes after Willis scored his first-ever try for England, came as Negri attempted to grab Willis around his torso and twist the player away from a contested ruck to free space for his teammates.

Unfortuantely for Willis, the move placed incredible pressure on his left knee, causing it to give way – which led to the 24-year-old English international screaming in pain – picked up on the television broadcast – and prompting several of his teammates to look away from the grisly injury.

The game was stopped for more than seven minutes as Willis was treated on the pitch before he was stretchered off for further treatment.

The injury put a significant dampener on England’s win, with Willis in particular experiencing the full spectrum of emotions after scoring his debut try before, just minutes later, suffering an injury which threatens to derail his playing career – temporarily, at least.

As Willis woke up on Sunday to the prospect of potential knee surgery and months of rehab, he may well have been heartened by a note issued to him on Twitter by Negri, the man responsible for his injury.

“A quick message to Jack Willis,” he wrote on Twitter. “So sorry about what happened yesterday. Just horrible and never nice to see.

“Myself and all the [Italian rugby] boys are wishing you all the best. I hope to see you back on the field again soon. Take care and we all know you will be back stronger. Seb.”

The high profile nature of this injury is bound to add further weight to calls to ban the ‘crocodile roll’ technique after several other players have been injured due to it.

“The game needs to do more to stop the ‘crocodile rolls’ that led to the injury to Jack Willis,” said retired referee Nigel Owens.

“You cannot target someone’s knees. Teams have been using judo coaches to teach players how to roll people away from the contact area. That should not be allowed.

“It is similar to the scrum feed. They are worse than they have ever been but we let them go because that’s how rugby is played and refereeing has to be consistent.”