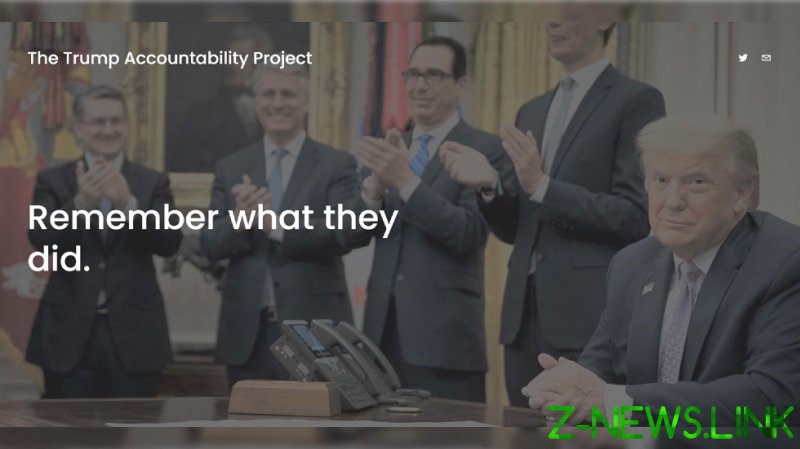 Since the mainstream media declared Joe Biden the next president of the United States, social media has been ablaze with emboldened leftists not content to enjoy their victory, but seeking retribution on those who supported Donald Trump.

Congresswoman Alexandria Ocasio-Cortez was among those who led the way, asking her followers to archive tweets from Trump supporters in case they’re deleted.

Even more sinister was a tweet from former national press secretary for the Democratic National Committee Hari Sevugan that linked to something called the Trump Accountability Project.

The Trump Accountability Project’s website states that we should “never forget those who further the Trump agenda.” The website targets people who worked for his campaign, Republican National Committee members, affiliated political action committees, government staffers and donors. As you can see, that’s potentially a massive list of people.

The goal of this is obviously to publicly shame them. The partisan individuals behind this site clearly do not want to see anyone who has ever backed Trump in any kind of formal-capacity work again. They want to cancel every single person who gets listed, and make sure that they cannot earn another dime.

It’s horrifying, to say the least. The accusations that the website makes of “racism and anti-semitism” fall flat when you consider what’s actually happened over the past four years. You can’t seriously argue, for example, that Trump would have achieved the gains he did in minority voters if he was a blatant racist. And it’s a stretch to suggest that an administration which did so much for Israel is anti-Semitic.

Then again, the people behind this site are obviously not world-class intellects. These are individuals who want to destroy their opponents.

2020 has been the year of cancel culture, and it continues to ravage society in increasingly despicable ways. But this must be the most concerning example, yet – it’s considerably more chilling than anything we have seen to date. Let’s face it, there is no reason to believe that the people behind this will simply be satisfied with destroying the careers of people who were associated in any way, shape, or form with the Trump administration.

After all, it feels like anyone to the right of Pol Pot has been labelled a fascist by the Left for the last four years. If that’s what these people actually believe, they are not going to stop until they have ruined the lives of those they disagree with politically.

The Trump Accountability Project is not something that belongs in a civilized country. What will it lead to, other than an even more divided society where everyone is just going to hate one another more than they already do?

While so much of the current talk is about healing, there are clearly still those whose definition of the word encompasses a desire to burn anyone who disagrees with them at the proverbial stake. It doesn’t bode well for anyone as we enter four years of rule by Joe Biden and the Democrats.