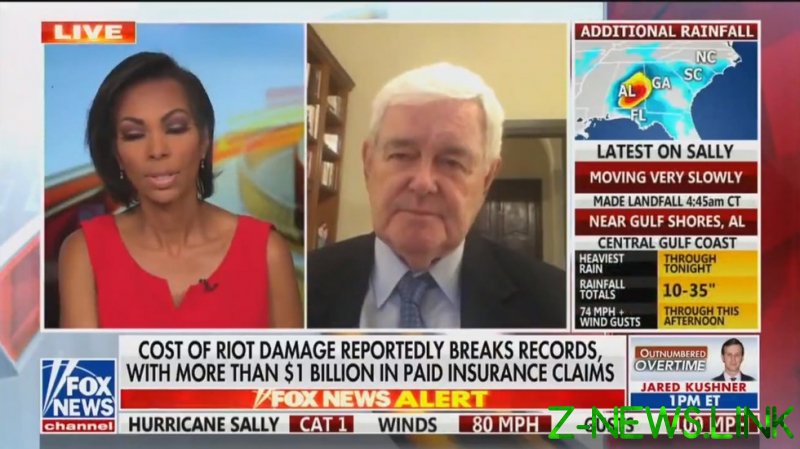 “The number one problem in almost all the cities is George Soros-elected, left-wing, anti-police, pro-criminal district attorneys who refuse to keep people locked up,” Gingrich told the hosts of ‘Outnumbered’ on Wednesday.

He was cut off by panelist Melissa Francis – who hosts her own show on Fox Business – saying “I’m not sure we need to bring George Soros into this.” Fellow panelist Marie Harf – who was a spokeswoman for the CIA and the State Department during the Obama administration – joined in, arguing that “George Soros doesn’t need to be part of this conversation.”

Gingrich is best known as speaker of the Republican-majority House of Representatives from 1995 to 1999. This is not the first time he has brought up Soros in a Fox News appearance. In early August, he told ‘Fox and Friends’ that Democrats are “owned by people who are financed by George Soros.”

Mainstream US media outlets openly reported that at the time, presenting the spending spree as a noble effort by the Hungarian-born Democrat mega-donor to “reform” the US justice system from the ground up.

Among the DAs Soros’s donations helped elect are Kim Foxx of Cook County (Chicago), Illinois, – who tried to drop the charges against actor Jussie Smollett for staging a hate crime against himself – and Larry Krasner of Philadelphia, Pennsylvania.

Then there is Kim Gardner of St. Louis, Missouri, infamous for releasing all rioters while trying to prosecute Mark and Patricia McCloskey, the armed couple who confronted an angry mob that had broken into their gated community.

Nor has Soros’s influence been limited to major cities. His funding was decisive in the election of Diana Becton as the DA in California’s Contra Costa County – just east of the San Francisco Bay Area – despite a plagiarism scandal. Becton became famous for pressing hate crimes charges against a couple that painted over the Black Lives Matter street mural during this year’s Independence Day weekend.

Mentioning any of that is now apparently off-limits on Fox News, however.