Home / WORLD / ‘So humiliated’: Trump blasts Biden’s withdrawal from Afghanistan as ‘terrible time’ for US

‘So humiliated’: Trump blasts Biden’s withdrawal from Afghanistan as ‘terrible time’ for US 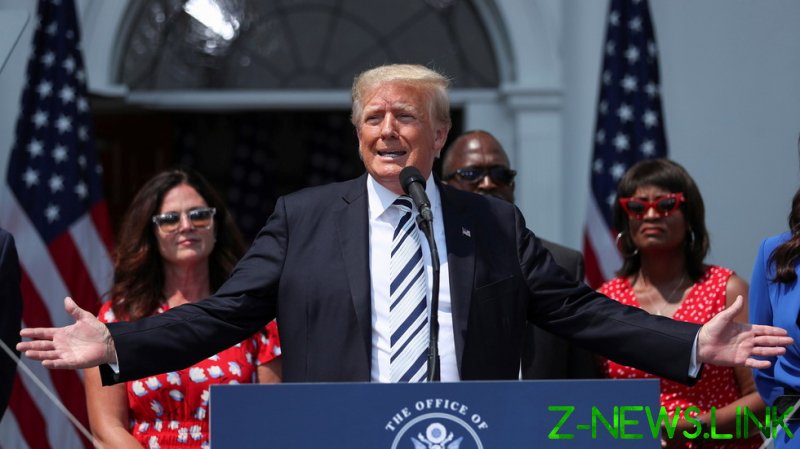 “It is a terrible time for our country. I don’t think in all of the years our country has ever been so humiliated,” the former president told Sean Hannity on his Fox News show. “I don’t know what you call it – a military defeat or a psychological defeat, there has never been anything like what’s happened here.”

Trump accused the White House of leaving many Americans “stranded” during the hasty withdrawal and last-minute evacuations when Taliban militants seized Kabul with little to no resistance on Sunday.

The real estate tycoon-turned-politician pointed to a chaotic scene of desperate Afghans swarming a US Air Force cargo plane on the tarmac of the Hamid Karzai International Airport.

Nobody’s ever seen anything like that. That blows the helicopters in Vietnam away – that’s not even a contest.

Trump was referring to the comparison many observers have made in recent days, noting that the image of an American chopper airlifting diplomatic personnel from the embassy building in Kabul was eerily reminiscent of the iconic images of the 1975 evacuation from Saigon, shortly before the capital of South Vietnam was captured by invading communist Viet Cong forces. Biden and State Secretary Antony Blinken have strenuously denied that these historic events were in any way similar.

Speaking to Hannity, Trump praised the deal he had cut with the Taliban in Qatar in February 2020 and blasted UN-backed ousted Afghan President Ashraf Ghani, who promptly fled the country when the Taliban took over Kabul.

“I never had a lot of confidence, frankly, in Ghani. I said that openly and plainly. I thought he was a total crook. I thought he got away with murder,” Trump said, adding that he has “never liked” the self-exiled Afghan leader.

Trump insisted he was tough during his administration’s talks with the militants and had threatened them with consequences if American soldiers were attacked. He also called the Taliban “good fighters” – in stark contrast with Biden, who previously sought to downplay the group’s strength and expressed full confidence in the US-trained Afghan security forces.

Under Trump’s deal, the US was to gradually withdraw from Afghanistan by May 1 in exchange for the Taliban’s pledge to halt attacks on Americans and to pursue dialogue with the Kabul government. The fighting between the militants and the government resumed almost immediately after the deal was made, however, the US has seen no combat deaths since February 2020.

After replacing Trump in the White House, Biden said US troops would leave by September 11, later moving the deadline to August 31. The militants, meanwhile, launched a sweeping offensive, capturing nearly all of Afghanistan by last week, and declared victory after seizing its capital.

The Taliban vowed not to hurt foreign diplomats and aid workers, but warned that Washington must finish pulling all its troops out by September 11, including some 5,000 soldiers redeployed over the weekend to watch over the evacuations.

Biden is currently facing criticism at home for the way he has handled the withdrawal and for earlier statements in which he suggested that the fall of Kabul was unlikely.

In a speech on Monday, Biden argued that he had acted in the spirit of the deal he inherited from Trump, stressing the US must not repeat the “mistake of staying and fighting indefinitely in a conflict that is not in the national interest of the United States.”

The president said that the US invaded Afghanistan in 2001 with the primary goal of fighting Al-Qaeda and other terrorist groups, and that building a stable democracy there was never part of the mission. He warned of a swift response if militants interfere with the evacuations or target American troops.