So as not to bow to China? 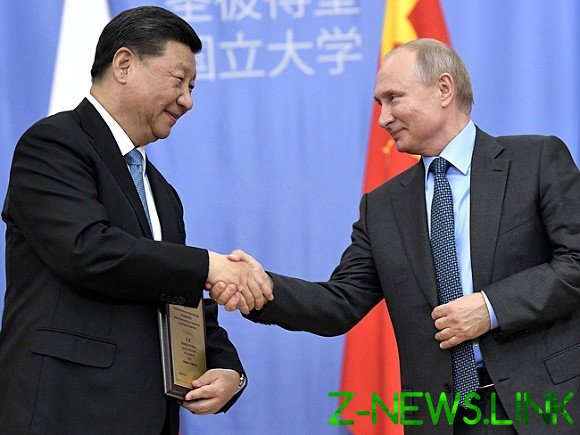 The Chinese leader apparently felt a special sense, seeing as the Russian gostepriimny singing his praises on the very spot where Mao had once acknowledged the rule of Stalin.

State visit of the President XI Jinping had, of course, and the business side. However, I will start with the Protocol. According to my subjective assessment, it is more impressive than.

Many have noticed that pandas DIN-DIN and Jouy, who arrived in the entourage of the head of China received we receive, which typically provide only the most notable persons. But this is just fine. Distinguished guests temporarily moved to the Moscow zoo not as a gift (their Chinese residence permit has not been canceled), and “a sign of special respect, trust to Russia,” said Vladimir Putin. This “two messengers of Sino‑Russian friendship,” said XI. Its honor — it is natural.

More impressive ceremonial generosity was shown once on other sites.

It culminated in an evening dedicated to the seventieth anniversary of the establishment of diplomatic relations between Russia and China.

No doubt, the seventieth birthday occurs. With two clarifications.

And this is the second clarification. On the website of the Russian Embassy in Beijing hangs a list of the ambassadors and envoys of Russia (the tsarist Empire, the USSR and present Federation) in China, Dating back to the mid-nineteenth century. The tsarist government had diplomatic relations first with the Tsin Empire, then (from 1913) with the Republic of China. And the Soviet Union, though with interruptions, but was supported in the 1920s, 1930s and 1940s diplomatic ties with the regime of Chiang Kai-shek and even concluded with him a Treaty of friendship and Alliance in 1945, the anniversary of which four years ago was innocently marked our national media resources.

See also:  On Dovgy has initiated a new case

I admit that in Beijing now see this as forgivable sins of the past, which you can watch through your fingers, if Moscow will make every effort to correct them.

The effort, as you can see attached. Counting relations began with the year that is recommended, and the celebration of the anniversary respectfully not adapt himself to the historical date, and a schedule of international visits of the President of si.

And even more important, though less conspicuous to our audience in the eye. Jubilee evening was organized at the Bolshoi theatre on 21 December 1949 noted another the seventieth anniversary from the birthday of Joseph Stalin. Arrived in Moscow the Chairman Mao was sitting there in the podium of honor, but of course, not the first place among the other students and associates of the leader.

I think with a special feeling XI Jinping said at the Bolshoi theater tactful his word: “Seventy years ago, Chairman Mao Zedong first visited the Soviet Union and the famous Bolshoi theatre, witnessed the opening of a new page in the history of Chinese-Soviet friendship…”

Today on these pages China, of course, comes first.

There is no need to retell the content of the talks our leaders and subtlety they have signed three dozen documents. It is already disassembled in detail. I will mention only two fundamental points.

“Has formulated the following basic principles, which the Parties are guided in their bilateral relations: mutual respect, equality and trust… the refusal from the establishment of allied relations, confrontation and dared against third parties…”

China emphasizes that there is a ally of Russia and will NOT support it in its current numerous conflicts with “third parties.” This is from the joint Declaration “on the development of relations of comprehensive partnership and strategic cooperation, entering a new era”.

And from the same: “the Russian Side supports the initiative of “One belt, one road”. The Chinese Side supports the promotion of integration processes within the Eurasian economic Union.” That is, Russia will help China in the practical creation of a transport corridor to Europe, it is beneficial to Russia or not. And China instead speaks a kind word about “integration processes” of the EEU with Russia.

That is, Europe remains a long time yet remain the main trading partner of Russia. China is slowly but steadily mastering the Russian oil and gas and agricultural resources. And the EAEC, despite the Moscow-Beijing sympathy for him, continued to retreat before the same China from the Russian market.

Thus, the material dependence of Russia on China is not yet a critical large. China accounts for only one-sixth of the Russian foreign trade, and on other lines based on it, most likely, has not become a hegemon. But the movement on this path is, and to continue his account with the understanding the far Eastern giant critically depend on Russia will never happen with him seven times more foreign trade, sixfold greater economy, four times as large military spending and conscious unwillingness to share our power, whatever the difficulties.

However, respectfully bow down before China, our superiors will have in the future. What else can you do with all the other quarreled so seriously and permanently?