Home / WORLD / ‘Smell of metal & flesh was so strong you could taste it’: 9/11 RT witness says it took him 20 years to watch the footage he shot

‘Smell of metal & flesh was so strong you could taste it’: 9/11 RT witness says it took him 20 years to watch the footage he shot 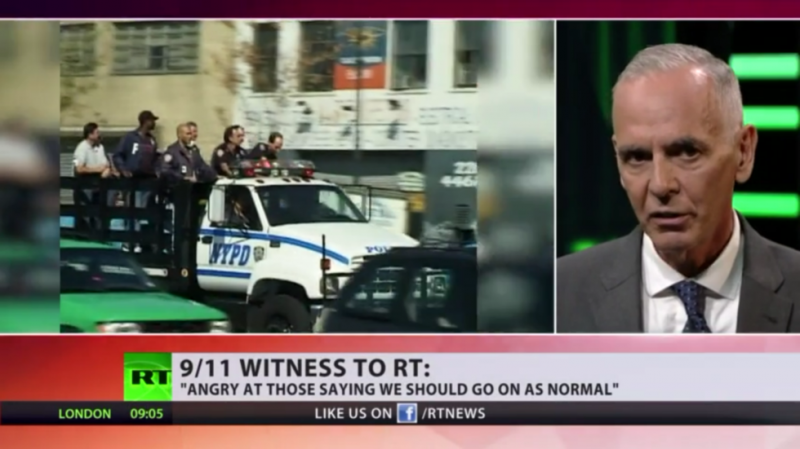 Exactly 20 years ago John Burns grabbed a camera and ran outside shortly after the first hijacked plane hit the 110-storey World Trade Center tower. He filmed as crowds of astonished and terrified New Yorkers stood still at the sight of giant clouds of smoke rising into the sky.

“I just felt I needed to document it,” Burns said. “I did shoot some video and I couldn’t look at it later. I never looked at it, I put it in a box and just put it away.”

As memorial services are once again held across the US in honor of the nearly 3,000 people killed that day, Burns for the first time has seen the harrowing footage he shot.

“The first thing I remember was that a commercial airliner had flown overhead and everybody just screamed and thought it was coming down also. Everybody ran for cover,” he said.

“Then you could see people with ash on them. They were walking with a lost look in their eyes. Then you saw this plume of smoke that once was the towers. And you looked at that and you just couldn’t believe that that skyline was gone.”

I remember the smell that came over the city… I can only describe it as metal and flesh. It was so strong you could taste it in your mouth.

Burns still thinks about friends who lost their loved ones and the overwhelming state of grief that took over the city. “It was a constant funeral with name after name after name of people who died. We saw their life stories on TV. It was just a never-ending funeral in New York for a while.”

“The media was constantly bombarding us with a message that we should live our lives like normal to show that we beat this. But I was angry…” Burns paused for a moment, struggling to contain tears, “I was angry because the people saying that were in big white houses with a lot of security… And we were afraid to go to public places, like Times Square.”

We just never knew what was going to happen at that point. I remember thinking – I’m going to bring my son into the world. What kind of a world is this going to be? And that scared me.

Al-Qaeda terrorists simultaneously hijacked four passenger airliners, crashing two of them into the twin towers of the World Trade Center. The third plane crashed into the west side of the Pentagon, and the fourth one crashed into a field near Shanksville, Pennsylvania, after passengers on board began fighting the terrorists.

The twin towers and several structures around them were completely destroyed. A new set of high-rise buildings was constructed to replace them, along with the National September 11 Memorial and Museum.

The unprecedented attack prompted former President George W. Bush to launch a global war on Islamic terrorism, which began with a US-led invasion of Afghanistan. Osama Bin Laden, the mastermind behind the 9/11 plot, was ultimately killed in a US raid in Pakistan in 2011.