Smartphone Oppo F5 will be frameless

Oppo, a relatively large manufacturer of mobile electronics, has so far not released a single edge-to-edge smartphone, behind almost all its competitors. However, there were rumors on the accelerated development of a model F5, which will finally get an elongated screen and will be released probably later this year. 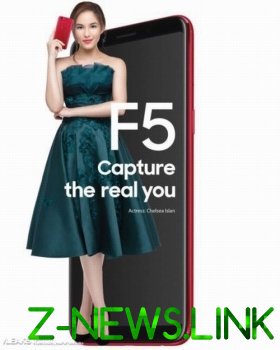 In the network posted a huge number of promotional images and teasers of the new Oppo F5, and it’s always a clear sign of the imminent announcement, although the date of this event has not yet been appointed. Very disappointing lack of facts about the hardware of the gadget – while the world knows only about the screen resolution, which, by the way, was not so high. Quad HD here will not be exact, but to the infamous HD+ at Oppo decided not to go down by choosing a middle ground – Full HD+ 2160х1080 or pixels, by the standards already post 2018 is quite acceptable.

Case Oppo F5 made of metal, and it is clearly not the weakest smartphone, so you can expect a 4 or even 6 GB of RAM and Qualcomm processor at 660-th model. According to rumors, the smartphone Oppo F5 is imprisoned for shooting high-quality photos and front camera, and place it, in contrast to the recent Xiaomi Mi Mix 2 on the screen, not under it. The announcement of Oppo F5 could take place next month, with release in December, in time for the holiday sales season.