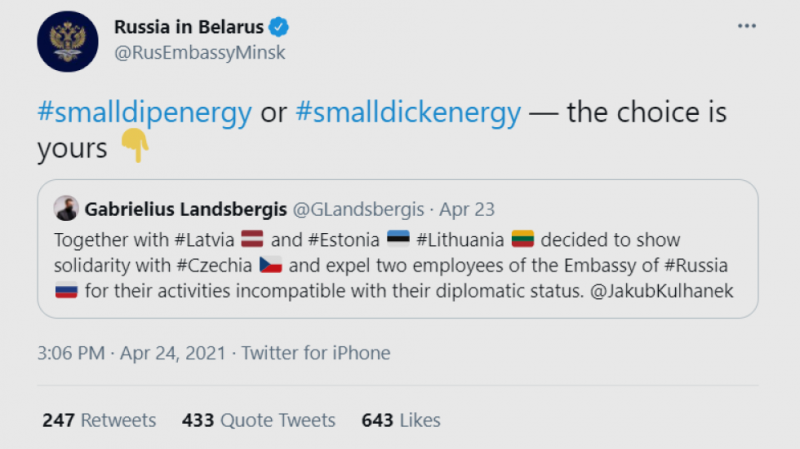 Latvia, Estonia and Lithuania issued a joined statement on Friday, announcing that they will ask several Russian embassy staff to leave their countries in a display of solidarity with the Czech Republic. Riga and Tallinn said they’ll expel one diplomat each, while Vilnius declared two Russians personae non gratae.

The move was met with a mocking response by the Russian embassy in Belarus – the country that borders Latvia, Lithuania and Russia.

In a post announcing the joint move by the Baltic nations, Landsbergis claimed that the Russian embassy staff were being expelled for “activities incompatible with their diplomatic status.”

The phrase “smalldickenergy” is explained in the Urban Dictionary as “cockiness without skill. It is the sexual equivalent of writing a check of $10k to show off knowing you don’t have it in the bank account.”

There’s no definition of “smalldipenergy” in the dictionary, but it is most likely derived from “small diplomatic energy.”

The move, with which the Russian embassy in Belarus was left unimpressed, is a follow-up to a diplomatic row between Moscow and Prague.

A week ago, the Czech Republic announced the expulsion of 18 Russian diplomats over claims that Kremlin intelligence officers were involved in a local munitions depot blast back in 2014.

Russia has called the accusations, which weren’t backed by any proof, “absurd,” and asked 20 employees of the Czech embassy to leave the country. Moscow alleged that Washington had a hand in the crisis as Prague’s move came amid a diplomatic standoff between Russia and the US.