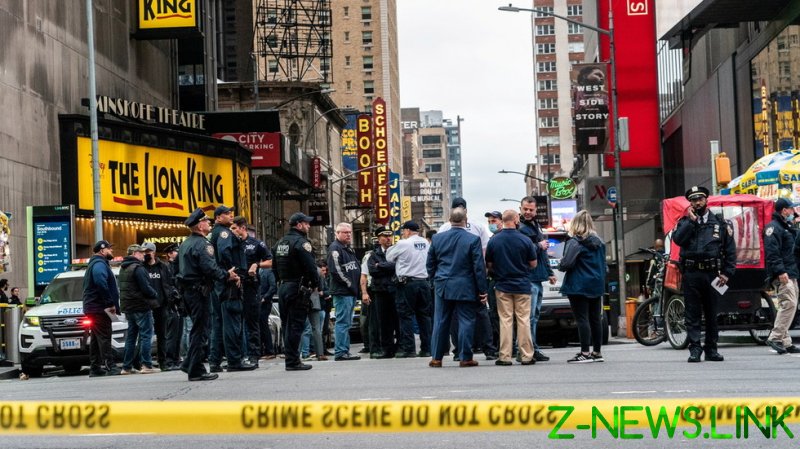 The three victims – a four-year-old girl, a 23-year-old and a 43-year-old – were struck when one of four men involved in a dispute pulled out a gun and fired shots around 5 p.m. on Saturday, NBC4 New York reported, citing police. A woman and small child were taken by ambulance to Bellevue Hospital for treatment of their wounds, and the victims were expected to survive, FOX5 New York said.

The shooting suspect fled the scene, and there have been no arrests. Part of Times Square, around 44th Street and Seventh Avenue, has been shut down while police investigate.

NBC4 reporter Myles Miller quoted a vendor as saying he heard two shots. “They was bleeding,” the witness said. “The toddler was bleeding, and the mom was crying.”

Another local television reporter, Steve Keeley of Fox 29, marveled that “a child in one of the top tourist spots in the world on a spring Saturday isn’t safe from this nation’s gun violence epidemic.”

One of the adult victims was a tourist from Rhode Island. Prior to the Covid-19 pandemic, Times Square ranked as the world’s second-largest tourist attraction, behind only the Las Vegas Strip, drawing 39.2 million visitors in 2019, according to World Atlas. But New York’s tourism and hospitality industries were ravaged by strict Covid-19 lockdowns and are projected to possibly remain below pre-pandemic levels until 2025.

Saturday’s Times Square shooting comes after the area became the latest scene in another New York crime wave, anti-Asian hate attacks, last Sunday. Two Asian women were assaulted by a black woman with a hammer. That incident, which led to a 31-year-old Taiwanese woman being hospitalized with a head wound, came amid this year’s 400% surge in anti-Asian hate crimes in the city.