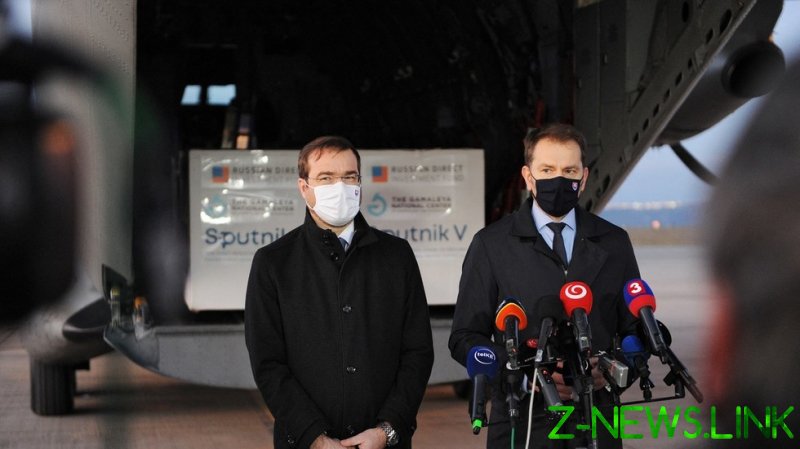 Krajci’s resignation was demanded by two junior parties in a four-party government coalition. One party outright threatened to leave the bloc altogether and another demanded a reshuffle. Both criticized the minister’s handling of the Covid-19 pandemic as the nation faces one of the highest per capita death rates in the world.

“Two coalition parties made my resignation a condition for them to stay in the coalition. In such a situation, I think there was no point arguing,” Krajci said in an emotional speech on Thursday. Responding to pressure, he also said that he is not “glued” to his ministerial seat.

Slovakia’s Prime Minister Igor Matovic lamented Krajci’s resignation by saying that the minister “worked hardest” among the government members and denounced his departure as “the most absurd in history.” Matovic himself initially faced similar resignation demands from coalition partners but eventually managed to retain his post.

Krajci “sought to protect health and lives with every decision he made. Unfortunately, those who put obstacles in his way made him their target,” Matovic said, adding that the purchase of Russia’s Sputnik V vaccines by the government was used by the minister’s opponents as a “pretext.”

The prime minister also said that Krajci would stay in his position for some weeks as the ministerial transition would be “gradual” while expressing his hope that the health minister would only leave his post at a time when the Sputnik V vaccination campaign would be in full swing.

Michal Sipos, the head of the parliamentary faction of the movement of ‘Ordinary People and Independent Personalities’ – the biggest party in the coalition – said that his faction still stands by Krajci and his decisions, adding that, if the minister’s proposals were implemented, the epidemic situation in Slovakia would be better.

Tensions in Slovakia’s political circles spiked last week following the first shipment of 200,000 doses of Sputnik V. Prime Minister Matovic, who personally welcomed the shipment at the airport, said he decided to purchase two million shots of the Russian jab without waiting for the EU’s approval.

His decision was met with a fierce backlash from his opponents and even coalition partners, who demanded the vaccine be approved by the European Medicines Agency (EMA) first. The prime minister was branded “Putin’s sidekick” who deserved a place in the “hall of shame” and even received a rebuke from the nation’s President Zuzana Caputova.

Two junior coalition members then accused Matovic of sidelining them in this decision and threatened to quit the coalition. The prime minister himself admitted that the political bloc was on the brink of collapse.

The criticism suddenly faded, though, when the Russian Direct Investment Fund (RDIF), which bankrolls the production and distribution of Sputnik V, offered to take the jabs back without any sanctions against Bratislava. Eventually, Matovic said that the jabs are not going back to Russia.

Sputnik V boasts an efficacy of over 91 percent and is still pending EMA approval. However, EU nations are legally allowed to purchase vaccines for emergency use from companies not yet approved by the EMA. Slovakia is not the first EU nation to buy Russia’s Sputnik V, Hungary already did earlier amid shortages of the Pfizer, Moderna and AstraZeneca jabs approved by Brussels.

Slovakia currently has the second highest Covid-19 death rate per capita in the world, behind only the Czech Republic. The nation of just 5.5 million also has an infection rate per 100,000 people which is four times higher than that of Germany, pushing the national health system to the limit.