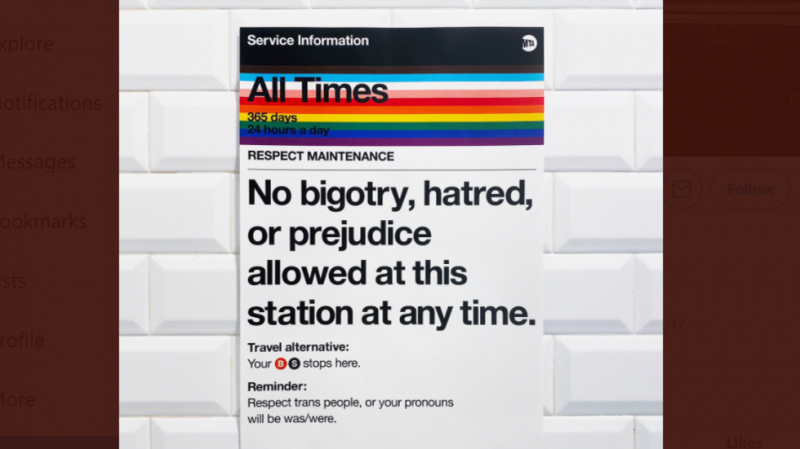 Along with nearly every other corporation and government body in the US, New York’s Metropolitan Transportation Authority (MTA) has plastered itself in rainbow graphics and started spouting pro-LGBT affirmations for Pride Month, which runs until the end of June.

“No bigotry, hatred, or prejudice allowed at this station at any time,” mock service information posters read, reminding the intolerant that “your BS stops here.”

However, one poster focuses its message on the anti-trans crowd, and addresses them with what looks like a clear death threat. “Respect trans people, or your pronouns will be was/were,” it reads.

The posters, which have been up in New York since the beginning of the month, impressed another North American transit authority. “Great sign,” Vancouver’s TransLink tweeted on Friday. “We concur.”

But there’s a twist in the tale. The posters aren’t the work of the MTA, but of a gay advertising director, Thomas Shim. Shim’s posters are designed to look like MTA announcements, and evidently fooled the TransLink social media team in Vancouver.

As for what “respect” means, that much was left unsaid. However, the trans lobby has set the bar for ‘disrespect’ fairly low in recent years. Uttering a gendered word such as “mother,” or suggesting that women may, in fact, be their own distinct gender is enough to invite death and rape threats from the most zealous among them.

In Washington, the White House has endorsed the use of “gender-neutral pronouns,” while President Joe Biden has allowed transgender people back into the military, and signed an executive order affirming their right to enter female-only institutions such as sports teams and women’s refuges.

Nobody in government has (thus far) suggested capital punishment for those who disrespect the transgender. Even Shim’s previous “Pride Train” campaigns didn’t go that far. Sassy messages in 2019 advised passengers “Don’t be a drag, be a queen,” and a year earlier, told bigots to “buy a one-way plane ticket that takes you far, far away.”

He’s clearly hardened his rhetoric in the intervening years, and the current crop of posters was announced on Twitter with an aggressive-sounding “Surprise, bitch. Bet you thought you’d seen the last of us.” The same ‘Pride Train’ Twitter account in January tweeted “TERFminate TERFs”, TERF being a derogatory term for feminists who distinguish between biological women and trans women.

Yet many people online were fooled, and the MTA apparently hasn’t been in a rush to take down the posters – indeed, Shim said back in 2018 that the MTA “let us do our thing”. In an era in which megacorporations trot out drag queens to peddle hygiene products, and children’s TV shows ‘educate’ kids on the nuances of “queer,” “trans,” and “non-binary” identities, the idea that a subway operator would take things a step further is not so far-fetched.