Home / WORLD / Slavoj Zizek: Can the Taliban have anything in common with ‘political correctness’? Surprisingly, there is one thing…

Slavoj Zizek: Can the Taliban have anything in common with ‘political correctness’? Surprisingly, there is one thing… 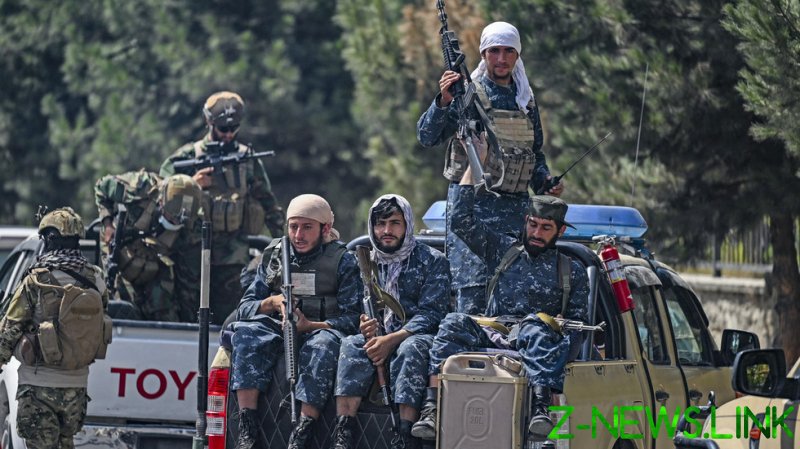 The Taliban has suddenly changed its stance toward women in public and working places. Their spokesperson, Zabihullah Mujahid, said at a news conference on Tuesday that working women should stay at home for their own safety, undermining the Taliban’s efforts to convince international observers that the group would be more tolerant toward women than when they were in power in Afghanistan between 1996 and 2001.

Mujahid added that the guidance would be temporary, and would allow the Taliban to find ways to ensure that women are not “treated in a disrespectful way” or “God forbid, hurt.” He also said that the measure was necessary as the Taliban’s soldiers “keep changing and are not trained.” This is why, he said, the new Afghan government asked women “to take time off from work until the situation gets back to a normal order and women related procedures are in place, then they can return to their jobs once it’s announced.”

The predictable Western reaction to this statement was that we now see how false and hypocritical the Taliban’s assurance that women’s rights to education and work will be respected: now they are showing their true colors…

But the reality is more complex.

We don’t need direct accusations of lies and hypocrisy to understand the shift in the Taliban’s position.

The soft attitude toward rape in Muslim countries is based on the premise that a man who raped a woman was secretly seduced (provoked) by her into doing it. Such a reading of male rape as the result of a woman’s ‘provocation’ is often reported by the media.

Here we stumble upon what I take the risk to call ‘the ideological unconscious’: an ideological edifice implies and relies on a set of claims which are necessary for its functioning, but which should not be stated publicly.

Back in 2006, Sheik Taj Aldin al-Hilali, Australia’s most senior Muslim cleric, caused a scandal when he compared women not wearing a scarf to raw meat. Reportedly, his comment was made shortly after a group of Muslim men were jailed for gang rape in Sydney.

The explosively-scandalous nature of this comparison distracted attention from another, much more surprising, premise underlying al-Hilali’s argument: if women are held responsible for the sexual conduct of men, does this not imply that men are totally helpless when faced with what they perceive as a sexual provocation, that they are simply unable to resist it, that they are totally enslaved to their sexual hunger, precisely like a cat when it sees raw meat?

In contrast to this presumption of the complete lack of male responsibility for their own sexual conduct, the emphasis on public female eroticism in the West relies on the premise that men are capable of sexual restraint, that they are not blind slaves to their sexual drives.

In a debate years ago, an Australian Muslim woman emphatically claimed that Islam is the most feminist of all religions. Now we can understand why: Islam – at least in its fundamentalist version – is obsessed with the idea of protecting women. But protecting them from what? From aggressive men? Beneath this public justification it is easy to discover its (mostly) hidden truth: not from men – the true fear is that a woman might enjoy being sexually ‘mistreated’ and used by men. Beneath the desire to protect and control women, there is thus lurking a much more ambiguous mixture of panicky fear and of the deep distrust of the moral composure of men themselves.

Is all this simply a remainder of the oppressive Muslim tradition?

Reading about life in Kabul these days one should take a minute to look at some of the images from Afghanistan’s capital in the ‘60s and ‘70s that are easy to find on the internet. We see young women there walking around in miniskirts, modern record stores, dancing clubs, university halls full of women, etc. Yes, there were conservative Muslim communities in the countryside, but they peacefully coexisted with other religions and with elements of contemporary secular culture. There is no direct continuity between this past and the Taliban: precisely in what appears as its most ‘archaic’ features (very narrow interpretation of Sharia, using state power to prohibit modern secular life like playing music in public), the Taliban is a product of modernity, a reaction to the enforced modernization of Afghanistan first by the Soviet and then by the Western occupations.

The ultimate proof of this secret link between the Taliban and modernity is the surprising similarity between the militant group’s stance on protecting women from male aggressiveness and the politically correct vision of women threatened by male aggressiveness which can cause life-long delayed traumas even if it wasn’t directly experienced as traumatic. This vision elevates sexual experience into the ultimate trauma, talking about “sexual assault survivors who hide their trauma – even from themselves.” How, then, can such a brutal act as rape be unacknowledged, i.e., not experienced as what it is?

It happens when, during a sexual encounter, “deep down I knew that what had happened had felt violating, degrading and not what I signed up for… Yet it took me a whole decade to realise what had really happened: I had been sexually assaulted.”

Why did it take such a long time, till the rise of #MeToo movement, to get it was a sexual assault? “My limited understanding of consent and sexual violence at that time, and my overall sexual inexperience, meant I believed I was to blame for what had happened, that perhaps I just didn’t know ‘how sex usually is.’” Only when, more than a decade later, a therapist said “that’s trauma,” hearing these words “gave me permission to feel the weight of what I had endured at 19, to understand why anxiety lurked close to the surface of my body. A voice inside my head finally said: ‘That was sexual assault.’ At 33, I know that now.” So “it can take years – sometimes decades – for some survivors to realise or accept that their experience amounts to sexual assault or rape.”

Such things definitely happen: it is easy to imagine a young woman who feels uneasy and abused in sex, but dismisses this experience as the result of her naive notion of what sex is – under the influence of prevailing ideology, she decides to endure her suffering. So we should not denounce the idea that a trauma can be recognized a decade later as a ridiculous PC retroactive projection. When new higher standards of what women’s rights and freedoms become the norm, we have the full right to read past events through this new frame. One should absolutely reject false historicism here, the idea that, in previous eras, oppression of women, racism and slavery were considered normal and we should not judge them by today’s standards.

There are nonetheless some further observations to be added here.

First, the case described above is not a case of repression in the strict Freudian sense: it is a fully conscious feeling of disgust and humiliation kept at bay because of (male chauvinist) social values. So what would or could be really repressed and traumatic here? The most obvious answer is: the exact opposite, i.e., the true trauma was that the woman secretly enjoyed being mistreated, and was absolutely not ready to admit it. Her being disgusted and feeling humiliated was already fake, a cover destined to obfuscate this disavowed enjoyment, a fact much more traumatic than her mistreatment by the sexual partner. To avoid a misunderstanding: this in no way implies that the man’s mishandling was justified (since the woman enjoyed it, so ‘she got what she wanted’) – quite the opposite. We all have secret dirty fantasies, and perhaps the most humiliating experience is to get what we secretly dream about brutally imposed from outside. This is why – an extreme example – a woman who secretly dreams about being raped will be much more traumatized when raped in reality than a strong autonomous woman.

These paradoxes already indicate the way emancipation should take place. Men should not be portrayed as brutal oppressors but as weak beings whose macho exterior covers up their frailty and impotence. And women should learn to treat men like that. A strong man is the only true feminist – he doesn’t need to oppress women in order to assert himself.