Home / WORLD / ‘Situation is getting out of control’: Migrants from Haiti revolt in attempt to escape bus transporting them in Texas

‘Situation is getting out of control’: Migrants from Haiti revolt in attempt to escape bus transporting them in Texas 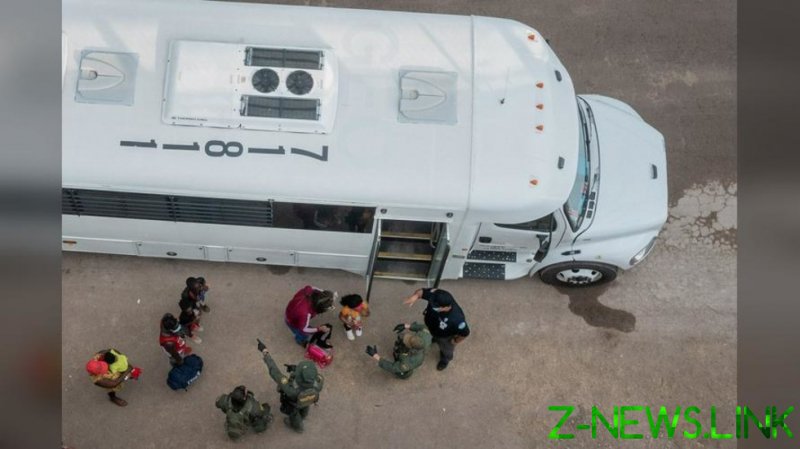 A group of illegal aliens from Haiti was being transported from a makeshift camp on the Texas-Mexico border to a processing center in Brownsville, Texas, on Monday afternoon when some of the migrants assaulted federal agents to take control of the bus, Kleberg County Sheriff Richard Kirkpatrick said.

“It was at that point when the driver was able to pull over, that’s when they were able to force the door open and abscond off the bus,” Kirkpatrick told local ABC News affiliate KIII-TV on Monday night. “Several of them managed to escape custody for a brief moment in time.”

But the Border Patrol agents had already called local law enforcement help, and after another scuffle with the migrants on the side of the road, all of the illegal aliens were taken back into custody, Kirkpatrick said. A bus normally used for prisoner transport was then brought in to take the unruly migrants the rest of the way to Brownsville, escorted by officers from multiple law enforcement agencies, he said.

Some federal agents were reportedly injured during the assault. “This is just a continued case in point of the extremely volatile situation that is getting out of control as we go forward with this type of continuing thing as the border crisis unfolds,” the sheriff added.

Mainstream media outlets largely ignored the alleged assault and focused instead Tuesday on footage showing horse-mounted Border Patrol agents confronting Haitian migrants who were crossing the Rio Grande River into the US. The agents were falsely accused of using “whips” to “round up Haitian refugees,” and Department of Homeland Security Secretary Alejandro Mayorkas told CNN that he was “horrified” by footage of the confrontation, saying it “defies all of the values that we seek to instill in our people.”

Vice President Kamala Harris, supposedly the White House’s point person on addressing root causes of the border crisis, said she fully supports a thorough investigation of the horseback incident. “What I saw depicted about those individuals on horseback treating human beings the way they were is horrible,” Harris said.

Texas Governor Greg Abbott has dispatched more state troopers into the border region to deal with public-safety issues arising from the migrant crisis, but those officers aren’t allowed to arrest aliens for illegally crossing the border. The governor blamed the Biden administration’s “open borders” policies for creating the “chaos” in Del Rio, Texas, where about 15,000 Haitian migrants are gathered under a bridge at the border.

Abbott said Tuesday that President Joe Biden has created a “man-made disaster of inhumanity” by promoting open-borders policies, and while Harris has focused on root causes of migration from Central America, the Haitian influx illustrates that people are arriving in from all over the world.

By abandoning any pretense of securing the border or enforcing US sovereignty, the administration has triggered a migrant rush “from all across the entire globe, including people coming from more than 150 countries,” Abbott said.