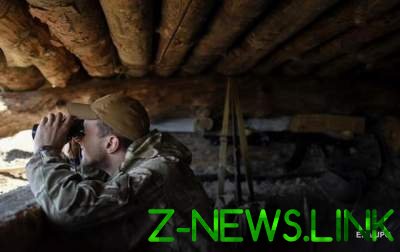 The militants actively used against AFU mortars, 120-th and 82 th calibers, prohibited by the accords.

Units of the separatists since the beginning of this day 12 times fired at positions of Ukrainian armed forces in Donbass. Two wounded Ukrainian military, the press service of the defense Ministry of Ukraine on Friday, may 3.

So, about 00:30 in the morning, the separatists almost an hour from Verhneuralskogo from machine guns to large caliber and small arms fired at soldiers OOS near the village of Pyshchevyk.

Near Novotroitsk, twice for the night was fired on positions of the AFU with mortars of 120-and 82-th caliber, automatic easel grenade launchers and heavy machine guns. Another shelling happened here after six o’clock in the morning – from the 120mm mortar and machine guns of large caliber.

By morning, the enemy fired four mines of calibre of 82 mm strongholds of AFU in the area of Birch and twice used mortars 82-gauge during the attacks of the defenders of Marinka. Also Marinka morning recorded two attack from the automatic easel grenade launchers, machine guns and large caliber firearms.

See also:  The defense Ministry said that the separatists are preparing a breakthrough on the front

The defenders of the Town were under enemy fire twice. 06:40 for 20 minutes separatists from Spartak fired from heavy machine guns and small arms, and after the 09:10 from Yakovlevka released six mines of calibre of 120 mm.

In Pavlopol about 06:00 in the morning there was a long attack of positions of VSU from APCS.