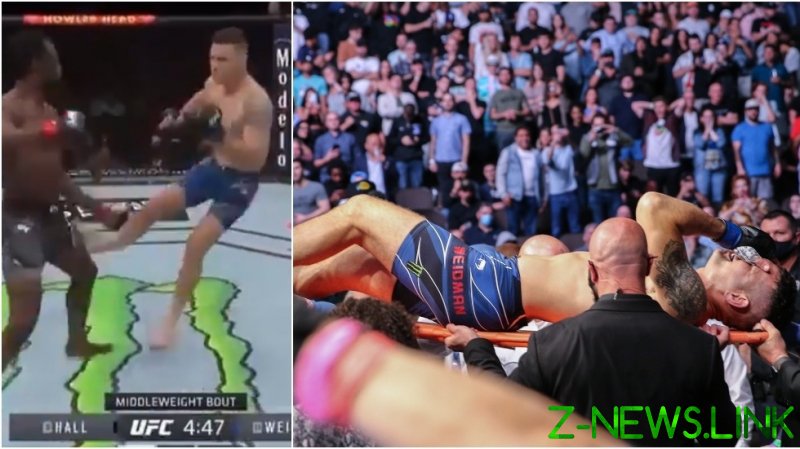 With a full capacity of fans returning at the VyStar Veterans Memorial Arena in Jacksonville, Florida, for the first time since the pandemic, the crowd bore witness to one of the more sickening incidents ever seen inside the octagon as Weidman snapped his lower right leg just 17 seconds inside the first round of their main card contest.

It was a horrific break as former 185lbs champion Weidman writhed around in agony.

On the UFC commentary team, Daniel Cormier said he was unable to watch as Joe Rogan implored him to look at gruesome replays of the incident.

Weidman, 36, was eventually stretched away in front of concerned fans.

In a dark twist of fate, Weidman was also involved in another of the most infamous leg breaks in UFC history back in December of 2013.

On that occasion, he was the witness as Brazilian legend Anderson Silva snapped his leg in much the same way in their clash at UFC 168.

This time, Uriah Hall, 36, picked up an injury TKO win – extending his winning streak to four – as fans and fellow fighters online reacted with horror.

“Man, I feel so bad for him. I hope he’s okay. I wish his family well if you guys are watching,” a classy Hall said afterwards.

“I hope he recovers, if he gets well, I owe him this fight, I hope he comes back from it. You’re still one of the best Chris.”

Many will wonder if Weidman, 36, can now bounce back, with the defeat being the former middleweight king’s sixth loss in his last eight fights.