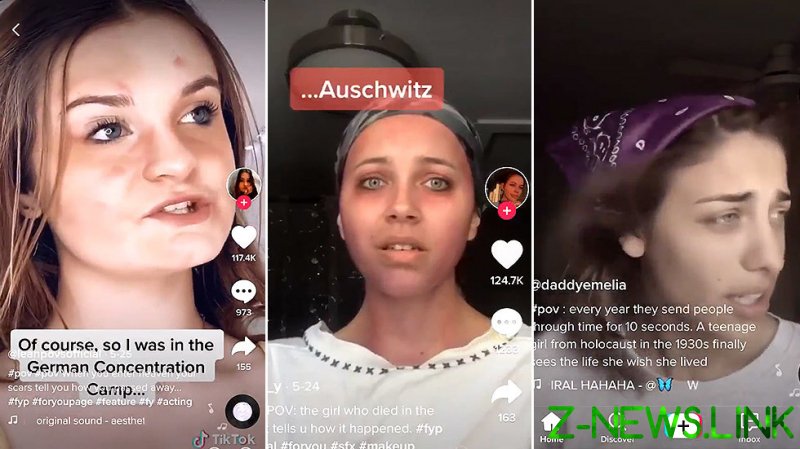 The latest craze that sees 15-second spoof videos about the Holocaust posted by Generation Z’ers on Tiktok actually considered entertainment is enough to make you roll your eyes right out of your skull.

Forget these clueless fools and their claims to be educating other people. I can honestly say that there is nothing a teenage kid with braces, wearing a baseball cap and standing by his skanky bathroom shower before lip syncing, “This shit is gas!” will ever tell me about the horrors that the evil Nazi animals perpetrated upon the Jewish people during the Second World War.

At the risk of offending his fans, somehow I don’t really think Bruno Mars and his track “Locked Out of Heaven” creates the reflective sort of vibe appropriate to a serious discussion on the slaughter of six million innocent people solely on the belief that the race they were born to somehow made them inferior.

But maybe that’s just me.

Having been to the death camp at Auschwitz, seen the ovens used to incinerate men, women and children by their thousands and the showers re-plumbed to gas even more with deadly toxic Zyklon B, the urge to put on some make-up, adopt a pained expression and pretend I was a Holocaust victim in heaven never crossed my mind.

Am I that insensitive?

Any visitor to the Nazi death camps will have their own intense experience. The realisation of an industrial approach to the extermination of the Jews is one thing – they could burn around 5,000 corpses every 24 hours using the five crematoria – but then there are the mountains of spectacles, suitcases, teeth and two tonnes of human hair that were taken from their 1.1 million victims at Auschwitz alone, nevermind the other death camps.

Then there is the silence. An eerie quiet hung over Auschwitz the day I visited, broken at times by the loud sobs from a visiting party of elderly Jewish-Americans, some of whom had been inmates at that very hellhole and still bore their permanent, identifying tattoos.

Their cries were painful, heart-wrenching and sudden, as unexpected memories hit them with an unimaginable emotional force.

Even today, more than 30 years later, I clearly recall those cries. And I don’t need Tiktok as an aide memoire.

In modern education, what is taught at school and read in books as history, which may seem a bit dull, dry and distant to a 16-year-old glued to a smartphone, was actually life to these poor people. Their history had flesh and bones and names.

While their numbers have dwindled as the years have passed, none of those who lived on the wrong side of the Holocaust would ever find a need for a Gen Z’er wearing make-up to resemble burns and bruises to help in “sharing” the horror on their behalf via a video platform most popularly used by immature tweens and teens to spawn dance crazes and amateur impersonations of famous people.

If we are at a point where imitating Holocaust victims in heaven is actually a thing that young people have no qualms about exploiting for the amusement of others then something is wrong with their understanding of not just history, but of the human condition.

The shocking lack of empathy and mind-boggling ignorance take your breath away, even if you can ignore the whole Holocaust as entertainment idea for a minute.

The overriding sentiment seems to be that as long as you get a laugh, it’s all okay. Isn’t it?