Home / WORLD / ‘Shrunk to fit?’ Internet puzzles over peculiar photo of Bidens kneeling next to ‘miniature’ Jimmy Carter & his wife

‘Shrunk to fit?’ Internet puzzles over peculiar photo of Bidens kneeling next to ‘miniature’ Jimmy Carter & his wife 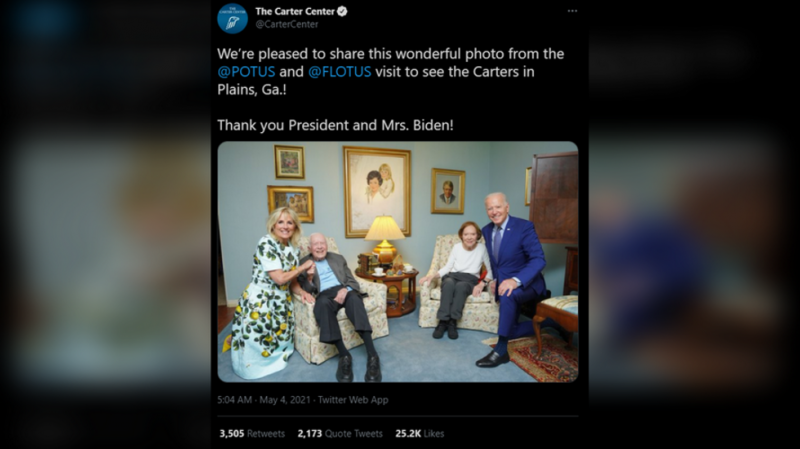 Accompanied by First Lady Jill Biden, the US president visited his Democratic predecessor and his wife, Rosalynn Carter, at their home in Plains, Georgia on Thursday. Biden had traveled to the state to hold a political rally to mark his first 100 days in office.

News agencies published several photographs of the Carters greeting the Bidens as they arrived at their home. But on Monday night, the Carter Center released a more intimate – and strange – photo marking their meeting.

The photo shows Carter and his wife sitting on armchairs, as Jill and her husband kneel, towering over their hosts. In the image, Jill appears to be significantly larger than Carter, while Joe looks like he’s twice the size of Rosalynn. Together with the old furniture and cramped feeling of the room, it almost seems as if the Bidens were posing inside of a doll house.

Commenters wondered why the Carters looked so small, with some joking that they may have been miniaturized in order to fit in the photo.

One observer hailed the “compassionate” and “salt of the earth” people in the photo, but said something was clearly off.

“I got questions about the spatial perspective of the photo staging as the Bidens are either ginormous or the Carters shrank in recent years.”

Others were more critical.

“This is not wonderful. This is creepy and bizarre… The only thing that could make this worse was if Joe was sniffing Mrs. Carter’s hair,” someone wrote.

Not surprisingly, the photograph also became the subject of several Photoshop masterpieces.

Although it’s not clear what caused the optical illusion, several Twitter users suggested that the photographer used a wide angle lense due to the small size of the room, making objects (and in this case, people) appearing on the edges of the photo appear larger than they really are.

Some reactions to the photograph ignored its strange proportions altogether. Many people wanted to know why Biden, who has urged Americans to mask up, was not wearing a face covering.