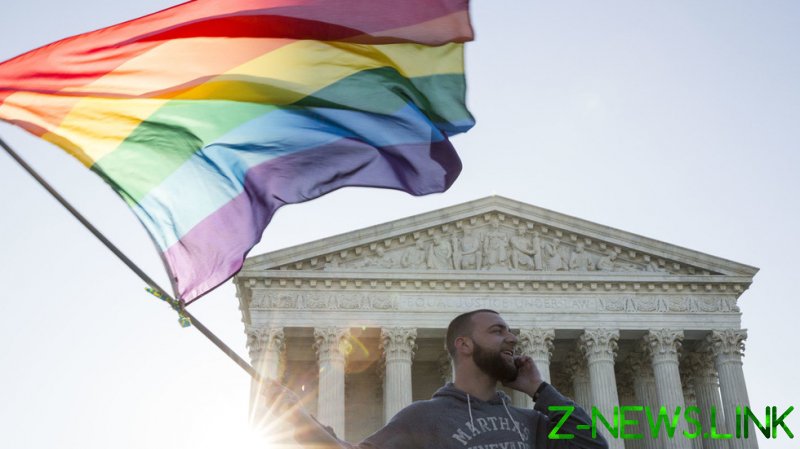 Artists have long held a special status in the US. While Pope John Paul II labelled Madonna’s controversial Like A Prayer video “blasphemy”, the singer exercised her creative licence and caused a Christian backlash.

Now web designer Lorie Smith is picking up the baton and taking her own fight to the Supreme Court for the same right to control what she creates. At the center of Smith’s case is her preference to not create web pages that promote LGBT marriage. She has been running her company 303 Creative for a decade, but felt her freedom to choose what work she performed for clients was under attack, and instigated legal action.

Smith explained, “What the state of Colorado has made clear is that if I create a website for a traditional biblical marriage between one man and one woman, that the state can force me to violate my beliefs and promote the opposing view.

“I believe strongly that artists, and all Americans, should have the right to live and work in alignment with their beliefs, whatever they may be, without punishment from the government.” The US Court of Appeals didn’t agree, and ruled 2-1 against Smith.

That means she is being forced to create and design whatever her clients ask of her, providing it’s within the law. To Smith this is unacceptable. “Every project, every client, every request I receive I take very seriously and there’s a process of determining: ‘Is this a good fit?’ Is this a message that I am comfortable promoting? Does it align with my beliefs?

“Regardless of what the content or the message is, it’s something that I have to evaluate before. What the state is forcing me to do is not be able to choose which messages I promote.”

Unsurprisingly, her case has spawned a significant amount of reaction. In some quarters, she’s considered a homophobe; in others, she’s a true American exercising her constitutional rights.

She continued, “Free speech is for everybody, not just those who agree with the government. And to give you an example, should an LGBT web designer be forced to create messages that promote traditional biblical marriage? I say no. Again, this is a clear example of the government overstepping.”

From the outside, it looks like Smith has a good chance of winning in the Supreme Court, as in 2018 it ruled that cake maker Jack Phillips was allowed to refuse to take orders for same sex marriages. He was also from Colorado and Smith’s attorney Kate Anderson said, “Colorado has shown a significant history of hostility towards Christians who hold traditional views about marriage, and Jack Phillips is a perfect example of that.”

The fact that the Supreme Court has become more conservative thanks to three appointments during Donald Trump’s presidency – as shown by how it refused to block the implementation of the controversial abortion limiting Heartbeat Bill in Texas – also provides some hope.

Anderson is senior counsel at the Alliance Defending Freedom and has clarified in court that Smith has homosexual clients. Her argument is not over whom she serves, but what she creates. “Colorado agrees that Lorie serves absolutely everyone. She has LGBT customers, but what she creates is speech: she is writing it, designing it and putting it on a website. And yet Colorado claims an ability to force somebody to create a message that violates their core convictions,” explained Anderson.

“We’re talking about free speech for everyone, no matter what your beliefs are about marriage. If the government can have somebody violate their core convictions by forcing them to say something that they don’t want to say, that’s dangerous for all of us.”

Smith feels the case shows that it is becoming harder to live by her Christian values in America. “I think it would be hard to look around the United States of America and see cases like mine and not feel that way,” she said.

While hate speech and discrimination clearly have no place in society, Smith feels it is draconian to not allow someone to express their religious beliefs in a non-confrontational way.

She continued, “The court is essentially not allowing me to choose which messages to promote. I am not [even] allowed to speak my own beliefs on my own business website. This is censorship at its worst and I will remain silenced until the court provides some sort of relief.”

This is something that Anderson believes is key to the case and takes it beyond a simple free speech argument. “Colorado is telling her that if she creates custom wedding websites celebrating marriage, then she can’t talk about her religious beliefs about marriage on her own site. So you have censorship and compelled speech, something that courts across the country have never required. But Colorado is.”

The decision to get involved in creative industries is a minefield, as Anderson explained, “What we’re asking the court is can artists make their own decisions on what they want to create? When you think how personalised art is and speech is, the talents that go into that, the time, the heart that gets poured into that, artists need to be able to look at their art and do something that is meaningful to them. That is what Colorado is getting in the way of.

Nevertheless, Smith is determined to keep on fighting to live and work in accordance with her religious convictions. She describes having to violate them as “painful” and concedes that she has received a torrent of abuse for going public with her case.

“I have received a lot of hate-filled messages and also a ton of support,” she said. “What’s important and encouraging to me is that even people who don’t necessarily hold the same beliefs as me understand what’s at stake and are supportive.

“If the government can force me to speak messages that violate my conscience, they understand the same can happen to them. Today it’s me – it could be them next week or next year.”