Home / WORLD / ‘Shots fired’ at US mission in Myanmar, embassy says amid clashes between police and anti-coup protesters

‘Shots fired’ at US mission in Myanmar, embassy says amid clashes between police and anti-coup protesters 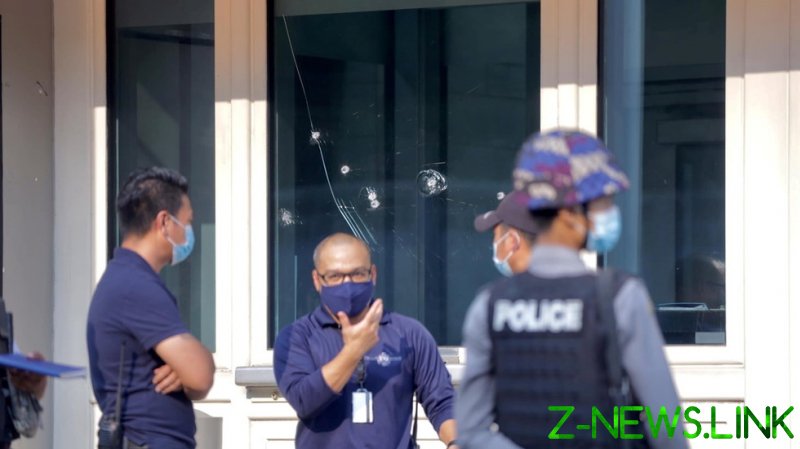 “There were no injuries. We are investigating the incident,” the embassy tweeted.

A photo from the scene shows bullet holes in the building’s window.

Anti-coup protests continued across Myanmar on Saturday. The Irrawaddy news website reported that 23 civilians were killed in a crackdown on protesters. Eight people were reportedly shot in Yangon when a crowd surrounded a police station, demanding the release of two women who were detained at a previous protest.

AFP said it was able to confirm that 19 people were killed on Saturday, including six in Yangon.

The US mission in the city urged its personnel to stay at home during the clashes between police and protesters.

The US imposed sanctions on Burmese officials and entities that it said were connected to the military. The blacklist was most recently expanded on Thursday. The US deputy envoy to the UN, Jeffrey Prescott, said Washington will continue to “press the Burmese military to cease all violence against peaceful protestors” and to “support the restoration of democracy” in the country.