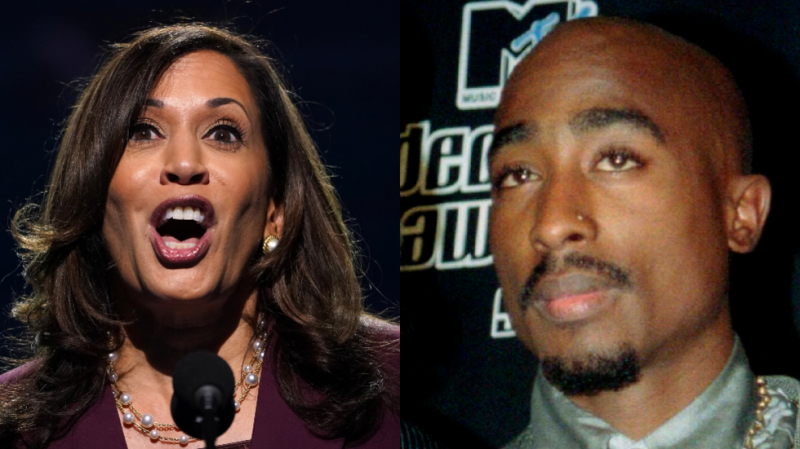 Speaking at the NAACP’s virtual convention on Friday, Harris was asked who she thought was “the best rapper alive.” Without missing a beat, Harris answered “2Pac.” Reminded that the ‘Picture Me Rollin’’ rapper is in fact dead, Harris did some damage control:

“I keep doing that!” she said, before saying that she would not mention any actual living rapper because “they should stay in their lane,” even though there are “so many” to choose from.

Harris was mocked online for her mistake. Conspiracy theories have long surrounded 2Pac’s death, with some asserting that the rapper faked his own drive-by shooting and escaped to Cuba (or Serbia, depending on who’s telling the story) to retire from gangsta life. Tabloid newspapers regularly feed these theories, and some commenters joked that Harris accidentally let the plot slip.

Others mocked her for pandering to black voters. The interview was the second time Harris dropped ‘Pac’s name in a bid for street cred. The California senator claimed in an interview back in February that she smoked pot in college, and listened to 2Pac and Snoop Dogg while she was inhaling. However, she was slated when commenters discovered that she graduated from Howard University in 1986 and UC Hastings College of the Law in 1989. Tupac and Snoop released their first albums in 1991 and 1993 respectively.

“She needs to update her pandering to the 21st Century,” one commenter sniped.

Pandering for the black or youth vote is par for the course in a presidential election, and Harris wouldn’t be the first politician to embarrass herself doing so. Hillary Clinton was ridiculed in 2016 for telling young voters to “Pokemon Go to the polls,” and for telling The Breakfast Club – the same hip hop radio show that interviewed Harris in February – that she never leaves the house without her trusty bottle of “hot sauce.”

Accused by host Charlamagne Tha God of pandering, Clinton didn’t deny the charge, shooting back “okay, is it working?”