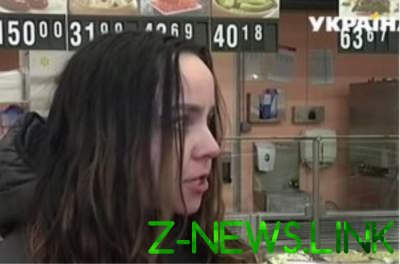 Money from a strange postality is – she eats lunch in the culinary Department of a supermarket, and also goes for a manicure.

In Lviv shopping center where “the lodger” – a well-dressed girl for three months a spends all day in the trading rooms, and spends the night at the bus stop near the Mall. A strange visitor to the Mall first noted by members of the cinema – it was in the early fall.

Since then, the girl practically took up residence in the Mall. Here everyone knows it – from the guards to the cleaners. They say she was asleep at the bus stop the next, and the day holds in store displays. Money from a strange postality is – she eats lunch in the culinary Department of a supermarket, and also goes for a manicure.

Oksana, Woroniak – 30 years. To questions about why she lives in the Mall and where takes the money, she answers evasively. That she became the star of social networks, Oksana knows, but I assure you that any help she doesn’t need.

In this case the guards of the center saw Oksana – conflict with parents: tell you that the relatives of the girl tried to take her daughter home.

The girl’s father, Roman, Woroniak, said that his daughter lives separately for 13 years. First she studied at the Lviv Polytechnic national University, then worked in state institutions, but in the summer, she was fired. After that, he said, Oksana kept to himself and ended his relationship with the family.

Wait until Oksana freeze on the bench at the Mall, do not be – after the hype in the social networks she volunteered to help socialnyi psychologist, and volunteers found temporary housing. It remains only to convince the girl to accept help.