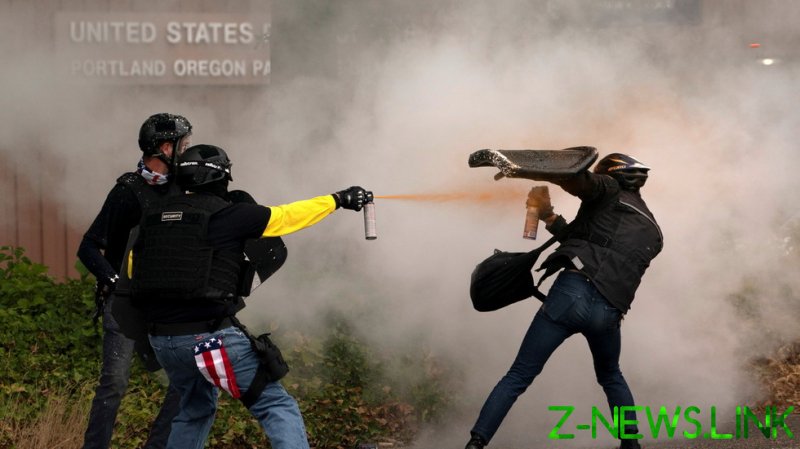 A brief gun battle also erupted in downtown Portland on Sunday, according to multiple videos shared by witnesses. Some of them showed a middle-aged man in a fedora hat hiding behind trash bins and firing several shots across the street.

From another angle, it appears that shots were fired towards the shooter as well, though it remains unclear who opened fire first. Some reports suggested the man is a Proud Boys supporter who was being chased away by Antifa members, before opening fire.

No injuries were reported, but several buildings and cars were damaged by gunfire.

Police swiftly detained the shooter seen in the videos, who apparently did not resist arrest, but it was unclear whether they were looking for any other suspects.

The shooting took place amid an already chaotic day in Portland, which has seen dozens of people from opposite camps clashing with each other, using all kinds of improvised weapons.

According to the Oregonian, the day began with a group of some 300 Antifa and another left-wing protesters swarming the area of Tom McCall Waterfront Park, and forcing a rival camp of around 100 right-wing activists to relocate their event to an abandoned Kmart parking lot.

However, smaller leftist groups followed them, engaging in verbal exchanges and skirmishes.

At one point, a van crashed into the parking lot.

The alleged ‘left-wing agitator’ behind the wheel, was maced and chased away, and his vehicle overturned by right-wing protesters.

There was no visible police presence throughout the day, besides the officers who arrested the gunman and swept the scene. In the run-up to the showdown, Portland police warned that they won’t intervene in clashes and instead “will be sharing public safety information with the public via Twitter.”

“You should not expect to see police officers standing in the middle of the crowd trying to keep people apart. People should keep themselves apart and avoid physical confrontation,” Portland Police Bureau Chief Chuck Lovell said on Friday.

Police defended their tactics in another press release on Sunday afternoon, acknowledging they were aware of some “violence” and “property destruction,” and requesting public help in identifying the victims and perpetrators.

“…detectives are reviewing evidence to determine whether charges can be brought for any criminal activity,” PPB said. “Just because arrests are not made at the scene, when tensions are high, does not mean that people are not being charged with crimes later.”