Shocking US census results: New York was 89 people short of keeping Congress seat, California down for first time EVER 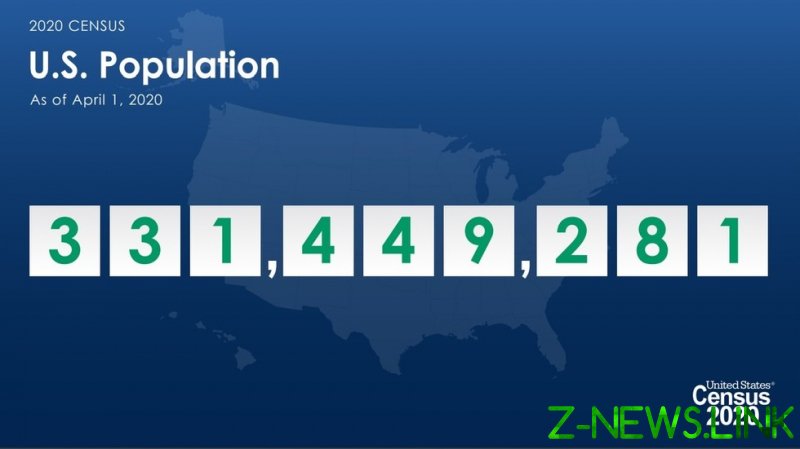 According to the apportionment results announced by the Census Bureau on Monday, the total US population as of April 2020 stood at 331,449,281. This was a 7.4% increase from 2010, but the second-slowest in history after the 1930s, Census officials said.

State results translated into a shift of seven seats in the House of Representatives, with Texas gaining two, followed by Colorado, Florida, North Carolina, Montana and Oregon with one each. Illinois, Michigan, Ohio, West Virginia and Pennsylvania lost one seat each, as did California – for the first time in history, no less.

The Golden State remains the most populous in the US, however, with 39.5 million residents. Wyoming remained the least populous, with only 576,851. This is the smallest number of seats changing hands between states since 1941, officials said, as 37 states remained at current levels of representation.

New York also lost a seat, but was reportedly only 89 people short of keeping it, in which case Minnesota would have lost a member of Congress instead. This was the smallest margin by which any US state had lost a congressional seat since 1940 and maybe ever, according to the New York Times; Oregon was 231 residents short in 1970.

New York will remain one of the four largest state delegations in the House, with 26 representatives. California will have 52, followed by Texas with 38 and Florida with 28. 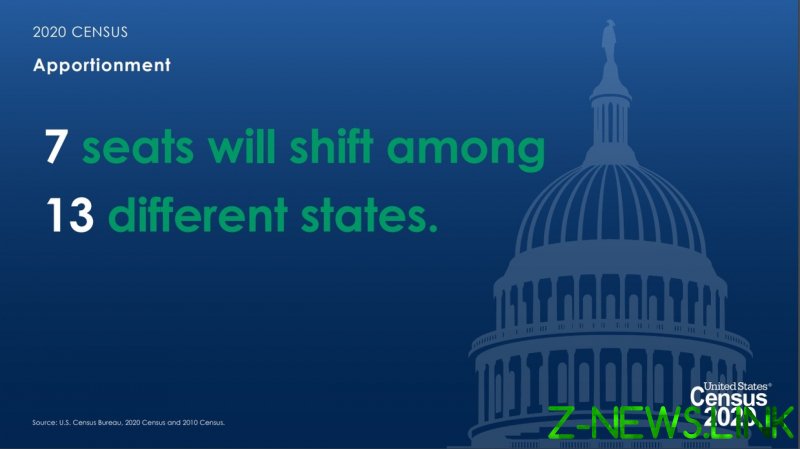 Each member of the House now represents about 50,000 people more than in 2010, or 761,169 on average. The size of the House was fixed by the 1929 Permanent Apportionment Act, though a proposal to grant the District of Columbia statehood would see that rise to 436, if adopted.

While Democrats have argued that Washington, DC residents are suffering from having to pay federal taxes without congressional representation, the population of the capital district actually rose by 14.6% to 689,545. By comparison, Utah at 18.4% is the state with the largest percentage increase in population since 2010.

Major media outlets have pointed out the political implications of the shift, with AP noting that Americans “continue to move to GOP-run states.” Five out of seven states that lost congressional seats are Democrat strongholds, compared to two that gained representation. However, some demographers pointed out the exodus from California translates into neighboring states becoming more Democrat.

“That’s the California exodus, blue state immigrants,” William Frey, a demographer at the Brookings Institution, told AP. “Californians are taking their votes and moving to other places.”

The legal deadline for announcing the apportionment results was December 31, but the Census Bureau delayed them until April citing challenges caused by the Covid-19 pandemic and what AP described as “need to correct not-unexpected irregularities.”

According to Michael Thieme, assistant director in charge of systems and contracts, the Census Bureau received an “unprecedented” number of responses without a 12-digit ‘Census ID’ code allocated to each known home address, but the bureau used “deep human expertise” to fit all the data together properly.

Actual redistricting inside the states can’t be completed until the census releases more precise data, which may happen in August or September. Several states have complained this will leave them little time before next year’s midterms.