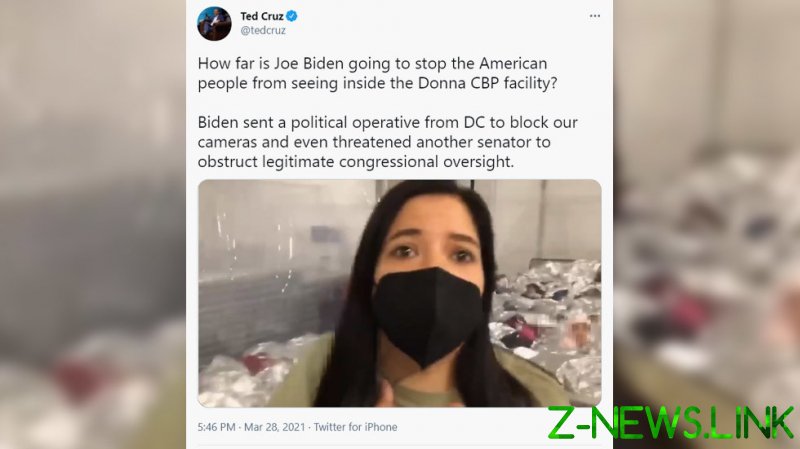 Cruz published a video on Sunday showing the facility in Donna, Texas packed with migrants wrapped in foil blankets with no social distancing, despite the dangers of the Covid-19 pandemic, as an unnamed woman frantically attempted to get Cruz to stop recording.

“Please give dignity to the people… Please respect the people,” complained the woman, who stood in front of the camera, prompting Cruz to question, “Is this dignity and respect? Look at these people, there’s a pandemic.”

“You were instructed to ask us to not have any pictures taken here because the political leadership at DHS does not want the American people to know it,” he claimed, adding, “This is a dangerous place and your policies are unfortunately trying to hide them.”

Cruz concluded, “I want to fix this situation and the administration you’re working for is responsible for these conditions. This is not respect.”

In his caption to the video, Cruz accused the woman of being “a political operative from DC” sent by President Joe Biden to stop Americans from seeing the conditions of the facility.

Americans on social media called the conditions documented in the footage “unacceptable,”“disturbing,” and “very inhumane.”

“This is truly outrageous,”protested one user, calling the attempt to stop Cruz recording a total “lack of respect for the people they have placed in these conditions and for the American People’s right to know.”

“Americans must be informed on these conditions in order to immediately make changes and improvements to our processes & systems,”tweeted another user.

Some people attempted to turn the criticism on Cruz, however.
Russell Foster, a Texas congressional candidate for Biden’s Democratic Party, accused the senator of hypocrisy for not scrutinizing immigration facilities in the same manner during former President Donald Trump’s administration, and blamed current immigration problems on previous “RACIST GOP administrations.”

The Biden administration has struggled to deal with a surge in illegal immigrants crossing the border, placing them in packed temporary overflow facilities and banning members of the press from documenting conditions.

Shocking photos from inside the Donna facility went viral earlier this month, and journalists, media groups, and human rights organizations have called on Biden to lift his ban on visitors – criticizing his administration’s lack of commitment to transparency.

One journalist was even physically removed from the southern border by law enforcement, who claimed to be working under the orders of US Customs and Border Protection, on Thursday.

California Democrat Rep. Linda Sanchez defended the Biden administration’s ban on journalists last week, arguing, “I don’t necessarily think that it’s appropriate for journalists to be inside centers that are not permanent places for children.”