Home / WORLD / ‘She’s such a tease’: ‘Blonde Bomber’ strips off ‘for the boys’ as Muslim opponent takes scales to toilet for 2nd weigh-in (VIDEO)

‘She’s such a tease’: ‘Blonde Bomber’ strips off ‘for the boys’ as Muslim opponent takes scales to toilet for 2nd weigh-in (VIDEO) 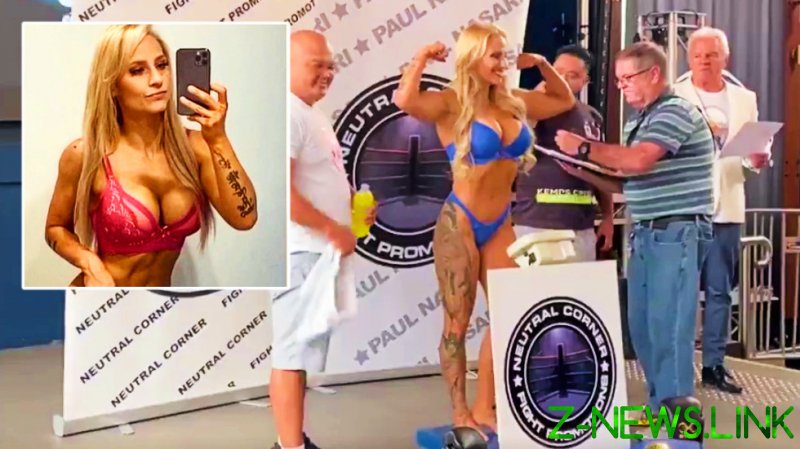 While social media favorite Bridges feigned annoyance at making the bantamweight limit so easily that she could have treated herself to a pre-weight glass of water, her unfortunate opponent, 45-year-old Carol Earl, weighed in 3.4lb over the maximum.

In accordance with her Muslim faith, Earl, who initially wore a tracksuit and has come out of a three-year retirement to face Bridges for the vacant title, was allowed to take the scales to a bathroom for her second attempt to make weight.

“Of course, in respect of her religion we had to take the scales in the bathroom and get all her clothes off. She was on weight,” said excitable Aussie Bridges, sharing footage of herself showing off her tattooed body and changing into a tiny pair of white shorts in between proudly flexing her muscles. “We have a fight.”

When a Twitter critic asked whether Earl’s religion could be “getting in the way of her sport of choice” and suggested the veteran should “make a decision on which is more important”, Bridges assured them: “It’s not getting in the way.

“Just means we had to take the scales to the bathroom. She made weight. Just got in the way of her getting in her underwear in front of people.

“I don’t think that means she should choose boxing or her religion.”

Earl is a five-time champion who has described her latest shot at a title as “an opportunity that I couldn’t let pass.”

The New Zealander made her debut at the age Bridges is now, 34, and has had 42 fights.

By contrast, newcomer Bridges has had only four including her debut in 2019, winning all of them.

“Her clothes weighed 1.5kg?” laughed one fan of the weigh-in footage, referencing the high-profile ringwear catastrophe suffered by a better-known boxer last year. “She got the same tailor as Deontay Wilder?”

“She had a few layers,” confirmed Bridges.

“For your information, I didn’t want to put my shorts back on. Coach made me.”

A fight video account that shared the scenes said of the show-off: “Ebanie Bridges is about to break the internet with her weigh-in attire.”

It later added: “She’s such a little tease – even says at the end ‘here’s a little treat for the boys’.”

The fight is taking place in New South Wales on Saturday. Bridges confirmed that it will not be televised – much to the disappointment of some of her admirers.