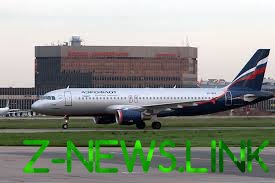 I then got very curious insider document that sheds light on the relationship between the national carrier Aeroflot and its base airport “Sheremetyevo”.

The letter, signed by one of the members of the Board of Directors of Joint stock company “international airport Sheremetyevo” Denis S. Paszkowski, categorically notifies the largest Russian airline that will now have to quickly release some used the land on which Sheremetyevo, burning with the fever of construction, will build the terminal S (about why you need it, we’ll talk later).

Get a grasp of these lines. “JSC “MASH” informs that at present alternative areas for industrial and other needs of JSC “Aeroflot” in lieu of exist. Thank you for fruitful cooperation”. It’s just a mockery! 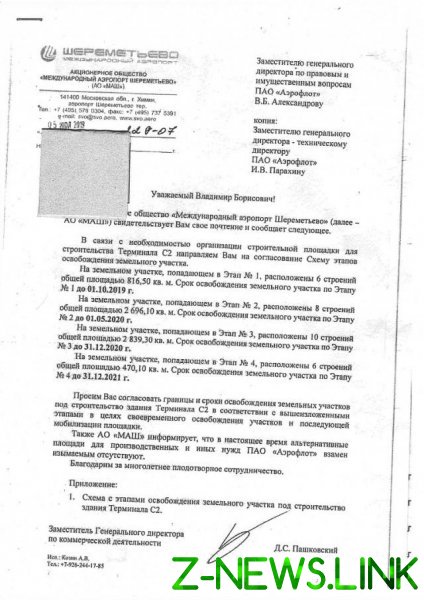 And the mockery of whom? Over the “Aeroflot”, which so vigorously defends his authority, he was ready even to public figures with scandal to take away all the legal benefits, just to punish them for their disrespect. And then some airport turns these “don Corleone” as he wants!

You know, why am I so surprised? Until 2012, the situation was completely the opposite, “Aeroflot” dictated its base airport any conditions, which only got into the head of his leaders. The airline did not hesitate in expressions, sometimes openly mocked the port, in every way showing their superiority. When the General Director of the Sheremetyevo Michael Vasilenko has refused to sign an agreement guaranteeing “Aeroflot” and its partners in the Sky Team total domination in the terminals D, E and F. In response, Aeroflot just began the process of removing the journalist from the post! The agreement eventually signed, demanding the resignation withdrew… And so their relationship was always.

Here, read the message one of the leaders of the airline, time of dominance of “Aeroflot”:

“”The second day screwing schedule — Sheremetyevo “without declaring war” started the repair part of one of the runways. But the cool thing is that their press service call the repair scheduled! Just like in Russian proverb about God’s dew in the eye. Chronicle of an undeclared war: for the day due to “planned” to repair the runway we have detained 76 flights! The delay ranged from 16 minutes to 7 hours””

You know? War. Directly in the text and is written – we are at war, and we will make all this “garbage” from our shared “public” until you do as we want. And it did! Up to a certain point…

Personality of Denis Pashkovsky-known, but his biography tells us one thing – this man, delivered to your place directly by private investors of the airport, the oligarchs Ponomarenko and Skorobogatko and Rotenberg. Mr. Paszkowski has long worked in the Renova, but in 2012 moved to the “TPS Capital”, one of the companies mentioned above triumvirate. In 2016 especially for it expanded the composition of the Board of JSC “MASH” (the government was not against), and now this man was evicted, “Aeroflot” with its lands.

Talk about the dominance of the Khimki airport on national airline not to mention Luggage is simply impossible. The situation with the transfer of baggage handling is very similar to the above-mentioned eviction. Sheremetyevo just took “Aeroflot” people who have been fired and re-scored to another company, without corresponding benefits, and worse working conditions. The state labour Inspectorate, by the way, it did not say anything (Yes, any honest businessman, who once these people have been through, picking on every little things polivitaminnoe, at this time is likely to crack teeth with rage).

The airport just put out his hand and took a very profitable business and willing employees, and managed to screw it up, fill up the business, creating a national sensation that led to connect even the Minister of transport (who, incidentally, sat on the boards of Directors of both companies, and thus knew about the real state of Affairs) and caused “to Aeroflot” the enormous reputational damage. And myself too… Now all at best laugh when next bought “expert”, not willing to give up a generous gratitude, he calls one of these two “world’s best”. Many people are also vowed not to fly Aeroflot open – where they really go…

Perhaps this is the secret of “success”. And where they go? Where the same “Aeroflot” will disappear from the current owners “Sheremetyevo”, who are keen to pick up all the airports of the Moscow region? Previously, the airline threatened to leave in Vnukovo, but we all know that sooner or later “Vnukovo” will move the TPS company. And administrative resources Vitaly Saveliev the “best airport in the World” have a name “Rothenberg”, which was much steeper than any defender the “best airline in Eastern Europe”.

In all the above I am only interested in one thing – where is the limit after which “Aeroflot” will just lash out and refuse to cut the pieces and give them to the three oligarchs?

P. S. Yes, I forgot a promise to tell about building a fever – she at Sheremetyevo is connected with the joint-stock agreement according to which the airport receives the shares for investment in infrastructure. Therefore, the building – leaky tunnel, the problematic terminal In, the second stage collapsible cargo terminal “Moscow cargo”, now demolished, which had stood for less than ten years (!) Terminal and build anew – like stock, that is money that would enable their further sale. For the sake of money and “Aeroflot” to drive, and work with the Luggage to screw up, actually, anything is merciless law of the Russian oligarchic capital accumulation.

P. P. S. of Course, suffers not one only “Aeroflot”. It is easy to guess that if we are Russia’s largest airline is forced to go on about the brazen airport, what can we say about others… In the hands of the “Sheremetyevo” huge Toolkit to put pressure on the airline. Some slots are worth… do Not agree to our demands? Will fly at an inconvenient time and to bear the losses! Or just never fly – go and find another airport if we don’t like. All this, of course, is in sharp contrast with the promise of Golden mountains, which promise in the transition, but who cares. I do not reviewers state agencies for sure!