Home / WORLD / ‘She had it coming’: Brawl breaks out at Heinz Field during NFL preseason game as woman slaps man in face (VIDEO)

‘She had it coming’: Brawl breaks out at Heinz Field during NFL preseason game as woman slaps man in face (VIDEO) 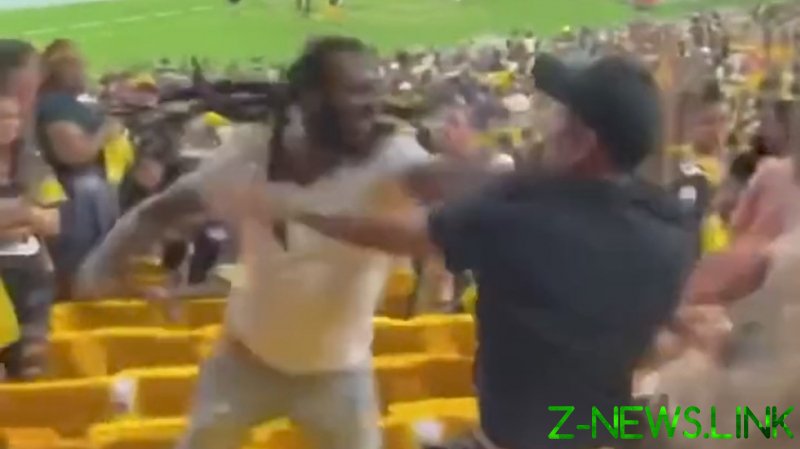 Improving their record to 3-0 before the NFL season kicks off on September 12 against the Buffallo Bills, the Steelers have delivered their best start to a campaign in 11 years.

And while their fans should have been enjoying the action and getting excited about a possible first Superbowl appearance since that period, in 2010, others preferred to argue amongst themselves and get physical.

In one incident, two clips of which have been seen a combined 100,000 times already, a blonde woman and African-American man are having it out on different rows of the 70,000 capacity stadium.

While the latter party is cool-headed in the beginning, the former yells crazily at her seated male accomplice, who is wearing a cap, to “shut up”.

She then slaps the man square in the face, causing him to restrain himself from hitting her before the woman’s male friend rises to engage in a brawl with the African-American man.

Knocked out for his troubles, the man slumps in his seat with the cap knocked off his head as his female partner shields him from further blows, with several fellow matchgoers screaming in disbelief.

On the internet, the masses took the side of the slapped man for defending his corner.

“She had it coming,” said one.

“And that dude gets knocked out AND verbally humiliated when he wakes up.”

“I hate to say this; but expect A LOT of this in the coming season,” predicted one onlooker.

Supporting this point, mass brawls and KOs have already been seen at venues around the US during boxing shows and baseball games since lockdown, with Los Angeles the setting for one such fracas just last weekend while an NFL preseason meeting took place.