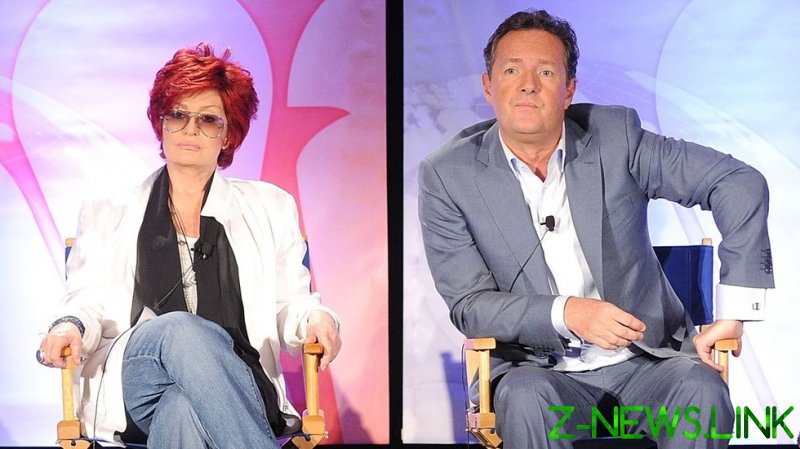 The emotional exchange took place during Wednesday’s episode of The Talk show on CBS, which Osbourne co-hosts with Sheryl Underwood, Amanda Kloots and Elaine Welteroth. Underwood brought up Osbourne’s public support of her friend, former ITV presenter Piers Morgan amid his controversial departure this week.

Morgan left the British broadcaster over his long-time critical stance toward Meghan Markle. His latest attacks against the wife of Britain’s Prince Harry came after the two gave an interview to Oprah Winfrey, which was highly critical of the royal family. Morgan brashly dismissed Markle’s claims that her mistreatment in Britain led her to suicidal thoughts, leading to a whopping 41,000 complaints filed against him with Ofcom, the British media regulator.

Underwood, who is Markle’s friend, asked Osbourne what she would tell people who “may feel” that her backing of Morgan “appears to give validation or safe haven to something that he had uttered that is racist.”

The premise of the question visibly irritated Osbourne, who challenged Underwood to show an example of Morgan saying racist things. She then went on an angry rant telling how she “at 68 years of age” hated having “to turn around and say: I ain’t racist” after false accusations. The station had to silence her, as she added some expletives to make the point, while Underwood called for a commercial break.

The debate continued after the show returned, with Osbourne pressuring a tearful Underwood into offering an explanation of why some people see Morgan as a racist without him saying explicitly racist things.

“This is not the exact words of racism. It’s the implication and the reaction to it. To not want to address that because [Markle] is a black woman, and to try to dismiss it and to make it seem less than what it is. That’s what makes it racist,” she said.

Underwood, a black woman, presumably has a different perspective on racism than white Osbourne. Osbourne defended Morgan from accusations of racism stemming from his criticism of Markle, but stressed she did not agree with his stance against the Duchess of Sussex – and had earlier in the week said she was “ashamed” of how the royals had treated her.

Apparently seeking a deescalation, Underwood stressed she didn’t want anyone to think her question about Morgan constituted an attack against Osbourne, to which she remarked that it was “too late for that.” Osbourne cut to what seems to be the core of her explosive reaction, which, she noted, applies “for everybody who was born white.”

“Piers doesn’t like someone [who] may happen to be black. Does that make him a racist?” she asked, to which other women said no. “So why can’t it be [that] he just doesn’t like her? Why does it have to be racist?”

At that point Kloots intervened, allowing for a possibility that Morgan’s dislike of Markle may have nothing to do with her skin color and be motivated by his royalist beliefs, for example. She found the silver lining in the fact that their show, combative as it was, still was a conversation where they could learn from each other, and not end in somebody storming out. Morgan quit his former show, Good Morning Britain, after being lectured by a co-host for “trashing” Markle, infamously leaving the studio right in the middle of broadcast.

While the emotional exchange on The Talk remained mostly civil, some reactions to it on Twitter were not so gracious toward Osbourne. Some people even said her pushing back against Underwood was ‘proof’ of her being a “racist gaslighter.”