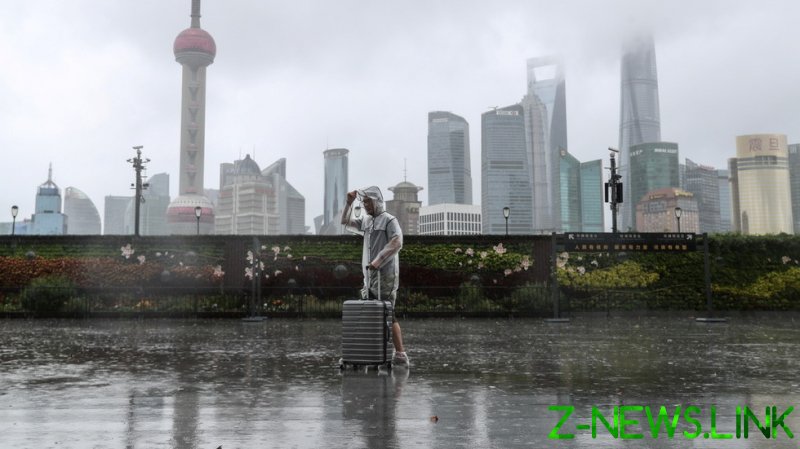 Shanghai issued the second-highest-level typhoon warning as In-Fa is expected to hit the city’s southern Pudong district in another landfall later on Sunday. One video posted to social media shows the sky over the city darkened by black storm clouds brooding over Shanghai’s skyscrapers.

Around 330,000 people were evacuated from the city’s coastal areas, including the Fengxian District. Over 100,000 civil servants and workers were deployed to the city’s streets as part of the massive flood prevention measures initiated by the authorities.

All passenger flights to and from Shanghai’s two airports were canceled on Sunday. The city’s ports – some of the world’s busiest shipping hubs – evacuated thousands of vessels. The international airport of Hangzhou – a city southwest of Shanghai – canceled all flights as well.

Several bus lines in Shanghai were also suspended to prevent busses from crossing bridges over some rivers. All high-speed trains bound for Shanghai were suspended starting Sunday evening.

The typhoon already hit the city of Zhanshan in the Zhejiang province south of Shanghai earlier on Sunday, with winds reaching speeds of more than 136kph, according to Chinese media. Another video posted online shows winds ripping through a street at incredible speed.

The typhoon is expected to swirl through Hangzhou Bay and make another landfall later on Sunday, potentially affecting the Zhejiang province and Shanghai. Footage shows people in the city already seeking shelter from the heavy rain and strong wind.

The typhoon comes as China reels from the devastating floods that hit the central Henan province, claiming the lives of dozens of people and prompting the authorities to evacuate hundreds of thousands.