‘Shame on you Finland! How dare you!’ Outrage as Helsinki police PEPPER SPRAY sitting XR protesters 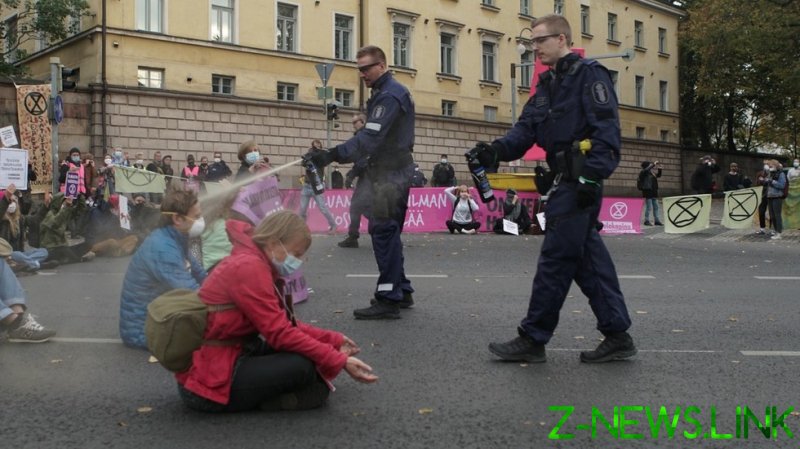 A sit-in protest was organized by Elokapina (Extinction Rebellion Finland) on the busy Kaisaniemenkatu road in Helsinki, where numerous road traffic and tram line routes converge, on Saturday.

The climate protesters were ordered to disperse, having blocked the busy road with their sit-down demonstration all afternoon before police finally, and seemingly without provocation, unloaded with pepper spray canisters, hitting the seated protesters directly in the face as photos and videos from the scene purport to show.

At least 51 protesters, some of whom had locked themselves to a boat, were detained by police according to an Extinction Rebellion press release.

In a statement, the Helsinki police department argued that given the extent of the traffic disruption and length for which the protest had been allowed to continue – roughly five hours – officers used the “most lenient forcible measure at [their disposal].”

“I’m frankly annoyed that things didn’t go well in this particular case,” Sanna Heikinheimo, a deputy national police commissioner at the National Police Board said, claiming that 99 percent of demonstrations held in Helsinki pass without incident. A report has already been submitted to the Ministry of the Interior and an investigation into the police use of force is under way.

Legal experts across Finland have expressed their concern at the use of perceived excessive force in the incident. Miikka Vuorela, a doctoral student of criminology at the University of Helsinki, claimed the officers’ actions “constituted a human rights violation.”

Kimmo Nuotio, a professor of criminal law at the University of Helsinki said the situation “doesn’t look good,” from a legal perspective, adding that “use of force must be based on careful discretion and situational consideration.”

In the meantime, another street blockade is planned for Wednesday October 7 as part of the group’s Autumn Rebellion (Syyskapina).

“Similar civil disobedience will be seen in at least 15 different countries throughout Autumn,” the group wrote on its website.