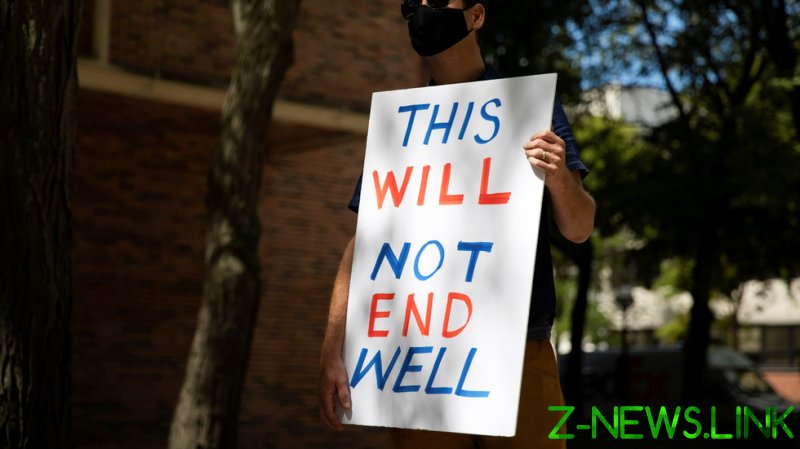 It says a lot about how far the one-time ‘land of the free’ has declined that college students are being trained in how to act as members of a digital Stasi, suppressing all stirrings of rebellion among their classmates. Campus authorities reward the rats for turning their peers in over the slightest infraction of an unspoken but increasingly restrictive political code, adding the equivalent of a few points to their social credit score. Whether the issue is critical race theory, Covid-19 mandates, or anything in between – schools are finding ways to use them as wedges to turn students against one another – great practice for the real world, where pitched political battles dog every discipline from mathematics to media studies.

Michigan State University directs students to report any problems with their college experience to the “Culturally Inclusive College Sharing System” (CIC), which teaches them that free speech is an outmoded artifact of less-tolerant times. Any words or actions they think were intended to “intimidate, demean, mock, degrade, marginalize, or threaten” their “identities” – “real or perceived,” as an incredulous Campus Reform writer specified earlier this month – are indeed harmful, the program affirms. When filling in the reporting form on the school’s website, the student snitch even has the option to select whether they are requesting retaliation from college authorities or merely ratting for ratting’s sake. Thus, even if they’re not offended, students can “help track trends and help determine patterns,” i.e. feed student actions into the maw of some vast artificial intelligence that will eventually be able to predict students’ behavior better than they themselves could ever hope to do.

Coincidentally (or not), AI is one of the top growth industries on many financial analysts’ projections for the coming decade. Playing janitor to some sprawling Lovecraftian AI is a burgeoning field unlike few others students have a chance to study in college. Management consultancies and private equity firms, once the post-college destination of choice for aimless student overachievers, have in many cases shifted focus away from assembling human brain trusts to programming massive AI supercomputers that do the heavy lifting of guessing where the markets are going next.

Meanwhile, schools are paying student “health ambassadors” to “combat vaccine misinformation and build vaccine confidence within their campus communities.” Not only are they expected to spread the gospel of vaccination to peers who have already heard it from every screen in their lives, but they’re required to report back to headquarters regarding how their work has helped shift attitudes about the Covid-19 vaccine – and presumably rat out any holdouts.

Schools like the University of Cincinnati have even deputized students to snitch on themselves, forcing them to download apps that track potential Covid-19 symptoms. Oakland University attempted to skip the smartphone entirely with a requirement that students wear a ‘BioButton’ that tracks symptoms itself with no wearer input. While that one was made optional following a massive student resistance campaign, it’s the exception rather than the rule.

Some 80% of students in a recent Campus Reform poll admit engaging in self-censorship, having learned quickly from watching their peers’ downfall that cancellation – for holding the “wrong” views about race, gender, Covid-19, presidential politics, or any of a dozen other topics – can be a fate worse than death.

And it’s just as well – now that more students are taking remote classes rather than submit to the jab du jour, they’re being tracked with software that snoops on everything from their surroundings to their eye movements.

As some economic analysts have argued, “Data is the new oil,” and young adults have had their data slurped up since Baby’s First iPad. Adding a new level of surveillance cements their (erroneous) belief that the future must be based on the rape of privacy. Trillion-dollar companies like Google, with more power than most countries, are serving up users’ internet histories based on the use of supposedly incriminating search keywords, and with 5G allowing for 24/7 real-time surveillance, the situation will only get worse. Good thing college students are being so well-prepared!

Another version of the student snitch program stationed the ‘ambassadors’ at high-traffic points in hallways, where they were authorized to lecture fellow students for failing to mask up or maintain social distance. Students at Penn State and Purdue University, among other schools, have been indefinitely suspended – threatened with tuition confiscation in some cases – for behaving like normal college kids, skipping Covid-19 testing appointments or threatening to attend a party. They learn that one can be deprived of assets based on arbitrary rules, preparing them for dirty little secrets like civil asset forfeiture, an obscene practice in which police take more money from Americans annually than burglars do every year.

Even those students who meticulously toe the line are finding that their personal information ends up plastered across the internet. California State University Chico admitted in August that a spreadsheet containing the names and personal information of 130 students who’d applied for vaccine exemptions from the school’s Covid-19 mandate had been “leaked” online.

Students learned several valuable lessons here. The separation of church and state, one of the most deeply cherished foundation myths of the US, no longer exists: the state is the church, as New York Governor Kathy Hochul made clear on the opposite coast earlier this month when she called Covid-19 vaccines “a gift from God” – without specifying whose God.

And those willing to stand up for their principles but still determined to play by the rules using ‘legitimate’ vaccine loopholes learned in no uncertain terms that there would be consequences to their rebellion – the opposite of the feel-good dogma they grew up with stating that every child is special and unique, or even the traditionally American doctrine of bodily autonomy. To get ahead, they learn, they have no choice but to break the rules… or be broken.

American society has slid so far downhill it can probably never be pushed back up again, to the point where the most valued skills lie at the nexus of the ability to create, enforce, and obey byzantine thickets of arbitrary rules, many with fees attached. Predictions of future growth industries are loaded with fields like AI, cybersecurity, e-learning, and tele-health – all fields that, while not especially popular among liberal arts colleges, are everywhere in the interstitial spaces of the university experience and all but require the exploitation of one’s fellow man to achieve success. The more young adults are thus indoctrinated, the more difficult it will be to ultimately reprogram our broken society – and the tighter a grip the successful snitches will have on whatever is left. Perhaps the US should ditch the bald eagle as its national animal and adopt the rat.