Shakhtar suddenly could not beat, “Steel” 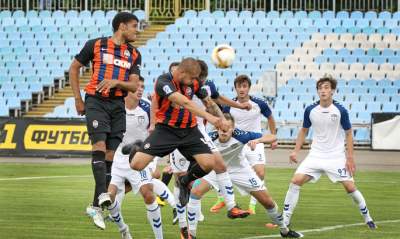 The current champion of Ukraine Shakhtar in the opening match of the 14th round of the Premier League has not managed dozhat “Steel”.

Before an important Champions League match against Feyenoord head coach of “miners” Paulo Fonseca has used the active rotation. In the first team of Shakhtar, for various reasons had no place Pyatov, Rakitskiy, ismaily, Bernard and Marlos.

Already on the 14th minute, Ferreira scored his trademark goal, the Argentinean responded to a cross from Butko in touch sent the ball into the net. “Steel” defended well, and heavy rain affected the attacking productivity of the owners.

See also:  "Dinamo" defeated "Steel" and has once again topped the championship of Ukraine

In the second half, the Pitmen continued impressively move through the field and ended up conceding a goal. On 66 minutes, Obradovic kick from the penalty forced Shevchenko pull the ball from his own goal.

At the end of the match Shakhtar could double to snatch all three points, but the beats and Fred Ferreira of the goal. “Dynamo” in case of victory over Karpaty will reduce the gap to the leader to five points.

See also:  Vita Semerenko could become a victim of the Russian doping system