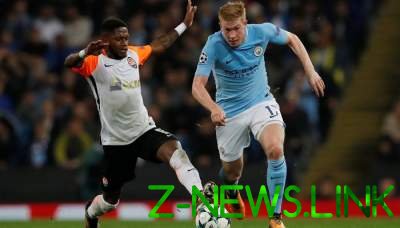 Champion of Ukraine Shakhtar in the second round of the group stage of the Champions League on the road with the score 0:2 lost the terrible “Manchester city”.

The first half left from this game a very pleasant experience – the Pitmen entrenched at his gate, and regularly made dangerous forays towards goal from Ederson. Moreover, Shakhtar is practically not inferior to man city for control of the ball.

The “miners” in the first half, good chances on goal missed Ordets, Marlos and Fred, who at the last moment closed the former Shakhtar midfielder Fernandinho. The British responded with two killer moments, De Bruyne and Sana – Midfielders “Citizens” of the ideal position did not hit the target.

The second half for Shakhtar began on the worst-case scenario – in the 47th minute, Marlos made a mistake in the midfield, Silva brought the shock position of De Bruyne, but the Belgian is a shot from 23 metres.

After scoring a goal the players man city finally took the initiative: Aguero and Sana could close all questions about the winner, but his points are not used. In the 70th minute Ordets in his penalty against the rules stopped San – Aguero went to the ball but Pyatov guessed the thoughts of the Argentinian and parried a penalty.

On 75 minutes, Shakhtar were able to qualify for a penalty, but the referee ignored a blatant handball of Stonesa in their penalty area. This was the last chance for Shakhtar to avoid defeat. And man city shortly before the final whistle do not miss another goal chance – substitute Bernardo Silva in the centre of the box found Sterling who needed not to miss by empty gate.

17 October in Kharkiv, Shakhtar will take on Feyenoord – if a team is Paulo Fonseca plans to compete for the playoffs, then lose points in the home match with the champion of the Netherlands, she can’t.