Home / WORLD / Sex-free marriage anyone? Welcome to the new trend for the wokeys: marrying your best friend

Sex-free marriage anyone? Welcome to the new trend for the wokeys: marrying your best friend 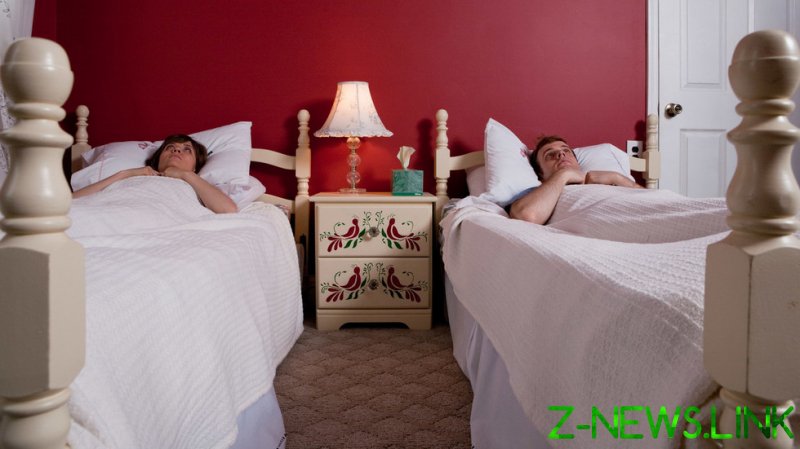 Call me a cynic, but don’t most marriages end up sexless anyway? Passion fades, adoration warps into irritation and, just give it seven years or so, a trip to a divorce lawyer is pretty much inevitable.

Everlasting and sexually supercharged romantic love is a myth. It exists only for Disney princesses.

So, why not start out where you and your spouse are sure to end up anyway? In separate beds. Sexless from the get-go. There’s no need to waste all that noisy energy. The sheets will be cleaner too.

‘Couples’ are starting to walk down the aisle, tie the knot – insert cliche of your choosing – in elaborate yet oddly conventional wedding ceremonies and they may well even share a kiss on the altar to seal the deal. But that’s it. They never touch intimately again.

Take New York best friends Jay Guercio and Krystle Purificato. They both jumped into plus-size wedding dresses in November last year, slipped rings on each other’s chubby fingers and shared their first and only kiss. Bish bosh. Married. Krystle is changing her surname to Guercio. Personally, I think that’s the wrong choice, Purificato is a way cooler name. And easier to pronounce.

“I want her to continue to be my best friend and my life partner,” 23-year-old Ms. Guercio told the New York Times. “We wanted the world to know we are each other’s go-to person in the world, and to be able to handle legal matters with the other appropriately. We are a couple, a unit and partners for life.”

Fair enough. If it makes you happy, dears. But, oh God, just listen to this family therapist bloke from, of course, California.

“It should be acknowledged that we’ve really normalized heterosexual monogamous romantic relationships to the point of stigmatizing other kinds of relationships,” Nick Bognar told the New York Times. “All of this is to say, I think this probably happens a lot, but people don’t talk about it much because their relationships are invalidated by others when they’re seen as not being part of the norm.”

Do real people pay real money to get this kind of boneheaded advice from these ‘experts’? What good does it ever do? Anyway, if getting involved in this new trend is your idea of marital bliss then the Guardian – of course, it’s the Guardian, it’s ALWAYS the Guardian – wants to hear from you.

Fill in the form with the details of your platonic marriage yarn and you can look forward to future Guardian articles examining this ‘new’ concept. Before you know it, there’s going to be a special set of pronouns for people in such sexless, loveless marriages – another fun way for people to contort themselves to avoid offending anyone by making ‘normalized’ assumptions about marriage.

They will join the long list of terms spawned on university campuses, vital terms we never knew we needed such as: cisgender (meaning, err, that if you have a penis you identify as a boy, a vagina makes you a girl), non-binary (neither male nor female), neutrois (neutral gender), etcetera – the list goes on, probably forever. There’s no real point in finding out which applies to you anyway, as it has probably already changed to something ‘new’ before you even reach the end of this article.

Platonic marriages are the way to go. A new trend for the wokeys that walk among us, mostly upon water.

These kinds of marriages, of course, have always happened – alliances between kings and clans, families and all that, and millions still enter arranged marriages with someone they barely even know. Marriage has not always been about love, it has always been a kind of contract.

Plus, I know plenty of people who married someone from another country so they could get a visa. They never had sex together either.

It seems to me, come to think of it, that for this new trend it’s actually the ceremony itself – donning a nice frock or a suit and tie – that is entirely the point. An excuse for a party. Like kids playing in the backyard, tottering around on their mama’s high heels and dad’s old suit.

Awesome. I love a party. And I’m a wannabe wokey, even if it means I have to read the Guardian for at least an hour a day – that’s the key, a little like reciting lines from the Bible or the Koran. I’ll do it! Let me in the gang and I’ll do it!

I am, Covid-19 permitting, arranging a trip back to my home town in northern England this summer. I plan to meet my best mate from school for several beers in my old local pub. Sticky carpets, wobbly stools, ‘one-armed bandit’ machines, pool tables and a dart board. Disgusting toilets. You know the type of venue. Fisticuffs are not uncommon.

After three pints, maybe four, and a pack or two of crisps – I plan to get down off my barstool and onto one knee and ask him to marry me. Maybe we can swap ring pulls off a pair of cans of beer? We’re good pals, we’ve never fought – not once, not even over a girl during puberty. He’s my perfect ‘life partner’ – if a little hairy.

If he says ‘yes’, we can have a quick ceremony at the local registry office and both get really drunk down the working men’s club with family and friends. It could get messy. Wanna come? Maybe I’ll invite the Guardian.