Home / WORLD / Seven years after Crimea rejoined Russia, Western leaders are fooling themselves if they hope peninsula can ever return to Ukraine

Seven years after Crimea rejoined Russia, Western leaders are fooling themselves if they hope peninsula can ever return to Ukraine 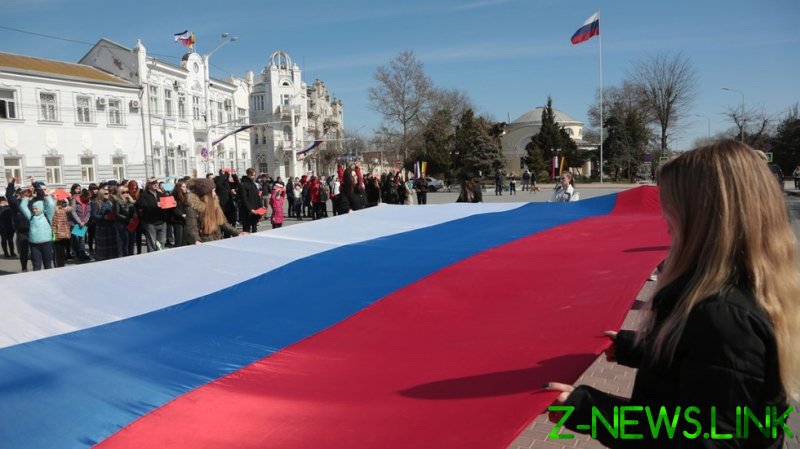 “Crimea is ours!” Seven years ago this week, that cry resounded across Russia, following what people in the West call the “annexation” of Crimea but what Russians prefer to call the “reunification” of Russia and Crimea. The annexation/reunification, or “reabsorption,” if you prefer, had serious ramifications.

For Ukraine, they were disastrous. For Russia’s international relations, they were bad. But for the people of Crimea itself, they have proven to be largely positive.

The disaster for Ukraine did not consist solely of a loss of territory. The Russian takeover of Crimea contributed to a more general unravelling of the Ukrainian nation. It encouraged some in Donbass, in Eastern Ukraine, to imagine that if they followed the Crimeans’ example and took to the streets, the Russian Army would come to their rescue, too.

Similar thinking persuaded the local authorities in Donbass to largely stand by and do nothing in the face of protests – after all, if there was a chance that Moscow might come, it was better not to be on the wrong side. This contributed to a power vacuum that enabled militants to establish the rebel Donetsk and Lugansk People’s Republics.

Had the ‘Crimean Spring’ not happened, or Kiev itself been less quick to announce its so-called “anti-terrorist operation,” events in Donbass might have turned out very differently. Thus, while the annexation/reunification of Crimea was relatively peaceful, it contributed to the outbreak of war elsewhere.

Russia’s actions in Crimea led to a serious worsening of Russian-Western relations, including a series of sanctions imposed on Moscow by Western countries. The damage goes beyond sanctions, however. Crimea reinforced an image of Russia in the West as an aggressive state bent on imperial expansion. It will take many years for this image to dissipate.

At the same time, what happened in Crimea prompted alarm in Russia’s neighbours, particularly the Baltic states. They demanded reassurance from NATO, as a result of which the Western alliance dispatched several thousand troops close to Russia’s borders. Clearly, this is not a consequence that is to Moscow’s liking.

Beyond that, the perception that Russian speakers form a potential fifth column, along with a certain amount of ethno-nationalist sentiments, has allowed both Ukraine and the Baltic states to take further steps to limit their rights within their countries. This includes a host of discriminatory laws that, for instance, severely limit education in the Russian language as well as its use in public places.

In these ways, the reunification/annexation of Crimea has had second- and third-order effects that have been decidedly negative for Ukraine, Russia and the broader international community. However, one key group views the results in an entirely different light. And this group is perhaps the one that matters the most: the population of Crimea itself.

According to official figures, 95% of Crimean voters supported the option of uniting with the Russian Federation in the referendum that was held on the peninsula in March 2014. Subsequent surveys suggest these figures accurately reflect public opinion in Crimea. For instance, a 2015 poll conducted by the German company GfK showed that 93% of Crimeans fully or mostly supported the peninsula’s absorption into Russia, whereas only 2% said they didn’t (5% didn’t know or wouldn’t answer).

Attitudes haven’t changed since. In 2019, scholars Gerard Toal, John O’Loughlin and Kristin M. Bakke questioned Crimeans with the help of Levada Center – an independent, non-governmental polling organization based in Russia. They found that 86% of respondents supported the decision to join the Russian Federation. This included a majority of Crimean Tatars (58%) – a group often portrayed in the West as being hostile to the unification.

Continued support for union with Russia reflects the fact that Crimeans generally think they are better off under Russian rule. Life has not been easy since 2014. Ukraine has shut off Crimea’s access to fresh water and electricity, causing water shortages and blackouts. Tourism from Ukraine has also taken a hit. Although the loss of tourist revenue has been overcome with the arrival of more people from Russia, there have been undoubted economic difficulties.

On the other hand, Crimea’s economic problems look relatively mild compared to those of Ukraine, while Russia has invested some $20 billion in Crimea since 2014. In November 2020, a member of the Ukrainian parliament from the country’s governing Servant of the Peopleparty, Elizaveta Bogutskaya, who used to live in the Crimean capital Simferopol, caused a small scandal by pointing out Crimea’s relative economic progress compared to Ukraine. “Russia is building a lot. I saw a video of the place where I lived. I just did not recognize it at all … there are already high-rise buildings, and highways have been built there,” she said.

Indeed, while Crimea remains poor compared to the rest of Russia, in 2019, it was declared the fastest-growing economy in the country.

Economics isn’t everything. Russian speakers in Crimea can also look to Ukraine’s language policies and feel satisfied that they are still able to operate in their mother tongue. Through its discriminatory actions, as well as its economic blockade, Ukraine has done its utmost to alienate the people of Crimea. It is hardly surprising that few regret their decision to part ways.

It is therefore clear that union with Russia enjoys massive support among the Crimean population. This is a huge problem for Western leaders, who insist that sanctions against Russia will remain in place until Crimea is returned to Ukraine, fot this will never happen. Not only would it be politically suicidal for any Russian government to attempt such a thing, but the population of Crimea itself would oppose it, and one can imagine that, if pushed, might do so violently.

It is not unreasonable for Western leaders to regard the reunification/annexation of Crimea as a serious breach of international law, as well as a worrying precedent that required a firm diplomatic response. That said, they are fooling themselves if they imagine that it can ever be reversed. Returning Crimea to Ukraine would mean forcing people to live in a country in which they don’t want to live. Not only is it difficult to see how this could be done, but it’s also impossible to see how it could be justified in terms of the human rights that Western leaders love to cite.