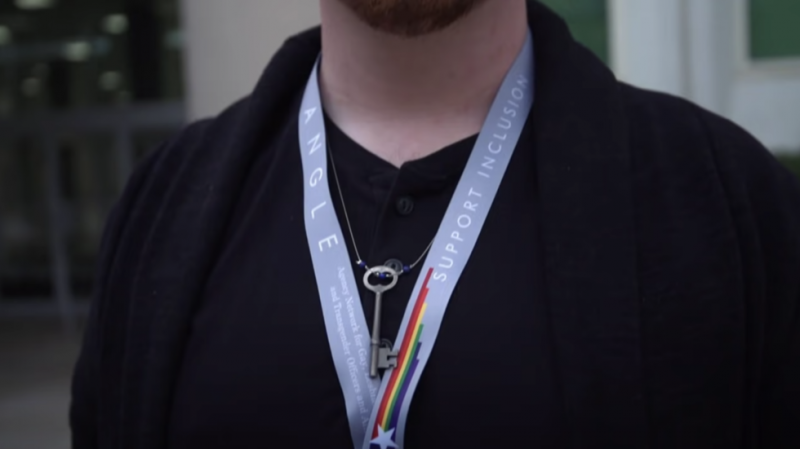 The ad, released on the agency’s official YouTube account in April as part of its ongoing ‘Humans of CIA’ series, features an unnamed employee who describes himself as an “agency librarian” during a voiceover monologue accompanying a sequence of videos showing him at work.

A previous point-of-view video in the series – from a “cisgender millenial” Latina intelligence officer with “generalized anxiety disorder” – elicited a widespread backlash after it went viral last week.

“Growing up gay in a small Southern town, I was lucky to have a wonderful and accepting family,” the librarian says, while rearranging books. “I always struggled with the idea that I may not be able to discuss my personal life at work.”

That was before he “noticed a rainbow” on former agency director John Brennan’s lanyard during his oath-taking ceremony. “Imagine my surprise,” says the man, who added that he was “stunned” to discover that the lanyard had been designed by ANGLE – the ‘Agency Network of Gay, Lesbian, Bisexual, and Transgender Officers and Allies’ agency resource group.

“Diversity of thought, ethnicities, backgrounds, and experiences is essential to the CIA’s success, and we need it at every level of the enterprise… Given our global mission, no government agency stands to benefit more from diversity and inclusion than does the CIA,” Brennan told the Daily Beast in 2017.

According to that report, which remarked that he might be “the best straight ally the agency’s LGBT community has ever had,” Brennan was partial to a lanyard “emblazoned with a rainbow patch and the logo for ANGLE.”

“Officers from the top down work hard to ensure that every single person, whatever their gender, gender identity, race, disability, or sexual orientation, can bring their entire self to work every day,” the man in the ad concludes.

Noting that “inclusion” was a “core value” at the agency, he says his “favorite thing about the CIA is that they encourage out-of-the-box ideas that drive real progress.”

Reaction to the ad on social media was anything but positive, however.

Journalist Kyle Becker tweeted that the CIA needed to “stay out” of domestic politics. “You’re there to serve the U.S. flag, not the rainbow flag,” he wrote.

Other users paraphrased the lanyard rainbow anecdote to note how “much better” they now felt about CIA airstrikes and other unpalatable dealings around the world.

Since its launch in 2019 as part of a broader recruitment strategy, the ‘Humans of CIA’ social media series has depicted real agency officers sharing their “first-hand experiences” in the intelligence organization, a CIA spokesperson told the Guardian.

While the majority of the series has attracted little pushback, part of the backlash to the Latina officer video was directed at the agency’s perceived willingness “to weaponize their power to target their political opponents: conservatives.”

The agency defended itself, remarking that the ad campaign had been effective. “2020 was a standout recruitment year for the CIA, despite the pandemic… Our 2021 incoming class is the third-largest in a decade,” a spokesperson told Fox News.