Home / WORLD / Serbia-Kosovo ‘normalization of relations’ plan: Will Belgrade give in to Western demands & shift toward ‘mutual recognition’?

Serbia-Kosovo ‘normalization of relations’ plan: Will Belgrade give in to Western demands & shift toward ‘mutual recognition’? 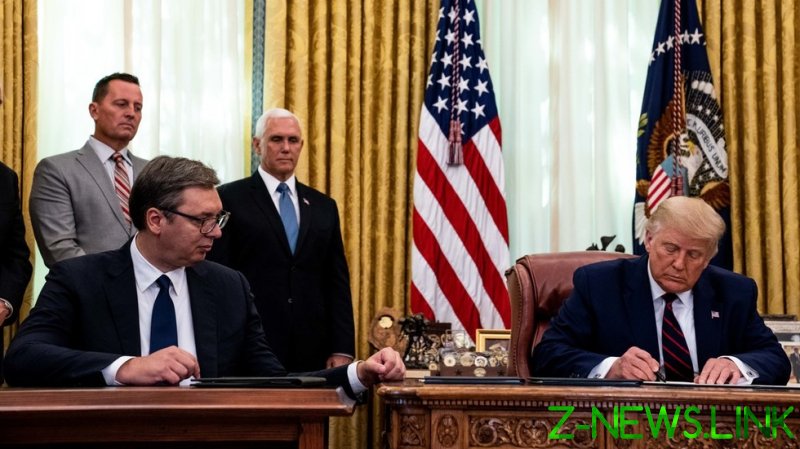 When Serbia’s President Aleksandar Vucic met with Donald Trump last month to sign a deal aimed at normalizing relations between Serbia and its breakaway province of Kosovo, many analysts saw this as a shift in Serbia’s foreign policy, which is traditionally close with Russia.

Indeed, Trump’s special envoy for talks between Serbia and Kosovo, Richard Grenell, stated that the deal was “distancing Serbia from Russia” by the “diversification of energy sources” that is defined in the deal.

Earlier this month, Vucic met with the EU’s special envoy for Kosovo, Miroslav Lajcak, and presented the plan for the implementation of the “agreement on the normalization of relations between Belgrade and Pristina.” Does it mean that Vucic believes that Washington has more to offer to Serbia than Moscow, at least in regards to solving the status of Kosovo?

Kosovo, which has been under UN administration since the 1999 NATO bombing of Yugoslavia, is recognized as an independent state by much of the West, despite UN Security Council Resolution 1244 reaffirming Kosovo as a part of Serbia.

One of the main defenders of this resolution and Serbia’s stance on Kosovo in the international arena is, in fact, Russia – unconditionally. The West, on the other hand, hopes that Serbia will join their bandwagon and give up its southern province for the prospect of being considered a part of the West – and living like they do in the West.

However, many Serbs still remember the unfulfilled promises made by the West in regards to Serbia’s EU membership in return for full cooperation with The Hague Tribunal, that largely convicted Serbs for war crimes during the 1990s and mostly let everyone else off the hook.

Serbia was told that it only needed to arrest and extradite former Yugoslav President Slobodan Milosevic for the EU doors to be opened. The doors remained closed and were still shut after similar promises were made in regards to former Bosnian Serb leader Radovan Karadzic and General Ratko Mladic. Now there is a new ‘last condition’ – solving the Kosovo issue.

The only solution the West considers a final one is Serbia recognizing Kosovo as an independent state. Whenever the EU or the US talk about other normalization issues, they’re merely a stepping stone toward “mutual recognition.”

Serbia’s president has said on several occasions that he will not give in to Western demands of recognition, but he still participates in the stepping stones, i.e. normalization talks and has already signaled that if Serbia received something in return, all options are on the table.

Is the ‘normalization of relations’ between Belgrade and Pristina a euphemism for ‘mutual recognition’? Or maybe the West doesn’t really need Serbia to explicitly recognize the independence of Kosovo, but rather needs Serbia to remain silent about Kosovo becoming a UN member state, something Kosovo can’t achieve if Belgrade, and therefore Moscow, resists.

Russia has held Serbia’s back on the issue, but many Serbs understand that Russians “can’t be bigger Serbs than Serbs themselves,” and it’s up to Belgrade to set the tone for what it wants for Serbia.

When the President of the Former Yugoslav Republic of Macedonia (or North Macedonia today) Kiro Gligorov met with US President Bill Clinton in Washington in 1997, the White House said that Macedonia has “made more progress than elsewhere in the former Yugoslavia.” Unlike its neighbor Serbia, Macedonia didn’t go down the path of resistance toward the West, but rather embraced US foreign policy, hoping to escape the fate of its former Yugoslav counterparts and live in peace and prosperity. Siding with the West gave Macedonia none of that – the country descended into civil war in 2001 and is, to this day, among the poorest in Europe.

And yet, the narrative that “listening to the West brings you Western living standards” is a popular one in the Balkans, especially in today’s Serbia that is struggling with a range of economic and political issues.

The question of whether Serbia should side with those who respect its decisions or those who are pressuring it seems like an easy one.

But the Serbian public is not entirely convinced that if they listen to the West, their country will end up like North Macedonia, which was persuaded to even change its name to join the EU – and is still not a part of the EU.

Previous Serbian governments advocated the idea that the EU would solve all of Serbia’s problems. The new government’s media is promising Serbs that Trump might do that. On the other hand, Russia isn’t making promises but it has been supporting Serbia for decades. Perhaps a solution for the Kosovo issue isn’t on the horizon, but it makes more sense to align with allies while waiting for that opportunity, rather than hoping that the powers that created the mess in the first place can now fix it.